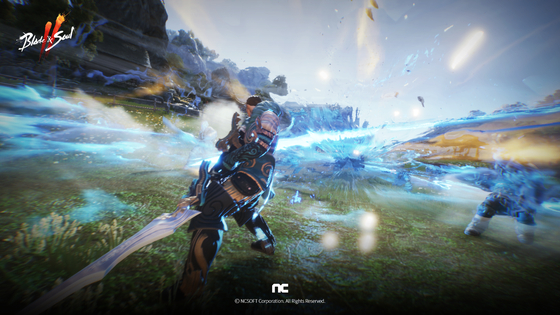 Blade & Soul 2 is the game publisher's third new game in 2021. It is a mobile spinoff of NCSoft's Blade & Soul, a massively multiplayer online role-playing (Mmorpg) game released in 2012.

The game is NCSoft’s answer to Odin: Valhalla, from Kakao Games. But within hours, Blade & Soul 2 was rated 2.9 out 5 rating on Google's Play Store and remained at 2.9 as of Monday based on 5,000 reviews.

"The game is just a flop," according to a comment posted on Google Play Monday.

“The company’s stock fell by 21.3 percent during the two days since the game’s release, and its failure has been reflected in the market price,” read a report by Hyundai Motor Securities on Monday. “That will inevitably lead to lowered expectations for third-quarter earnings, and it may even influence the success of the next new game if user complaints continue.”

The brokerage reduced the target price from 1.02 million won made in May to 840,000 won. The game sits at No. 4 on Google's game chart based on revenue as of Monday afternoon and is No. 9 on Apple's iOS App Store.

Critics of Blade & Soul 2 on the app store and YouTube mainly complain that the game is not very different from the original Blade & Soul game, especially the pay-to-win feature.

Korean game developers have been long criticized for their use of pay to win. The games can be downloaded for free, but players are compelled to purchase superior weapons and protection that improves gameplay.

On Blade & Soul 2, users were required to buy a “season pass” to earn certain items within the game. Following complaints, NCSoft released a list of upgrades made to the game on Friday so that all players will gain access to the same items without having to pay extra. NCSoft also rewarded all players with additional items as it issued an apology.

"We are deeply sorry for making users concerned after the release," NCSoft wrote in a statement released Friday afternoon.

Dissatisfaction with the revenue model and a weak debut of Blade & Soul 2 may lead to significant changes in the way games are made and marketed.

“It’s a given fact that a game company’s stock will rise or fall depending on whether its new game gets good reviews or not, but in this case, the decrease is quite steep,” said an industry insider who wished to remain anonymous. “It may be time for local game companies to think outside the pay-to-win Mmorpg box.”

Online Mmorpg games may be ranking high on game charts, but that’s not because people like them, according to Professor Wi Jong-hyun, a business professor at Chung-Ang University. The only reason Lineage M, Lineage 2M, Odin and other Mmorpg games are high up on the game charts is because of a handful of hard-core players who are willing to spend millions of won on games, not the general public, he argues.

“Game companies are just reusing old themes from existing games to make ‘new’ games that aren’t actually new, neither in gameplay or the payment system,” said Wi. “There will come a time when they can’t compete with outdated content anymore, and that’s when new ideas will succeed. Game companies must prepare themselves in advance so as not to fall behind when that happens.”