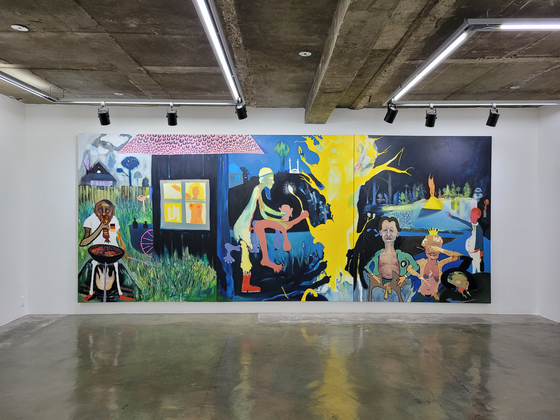 
A painting measuring 5.4 meters (17.7 feet) in width, titled “Halbzeit (Half Time)”(2019) by David Lehmann is now on view at Choi & Lager Gallery in central Seoul. This painting is part of the young German artist’s first-ever solo Asian show that is being held across the gallery, Hori Artspace and AIF Art Management in southern Seoul.

According to Choi & Lager co-director Choi Jinhee and AIF director Kim Yoon-sub, the painting satires various political phenomena including the re-emerging far-right ideologies represented by Adolf Hitler on the left side and fake revolutionaries and populists such as the one wearing a Che Guevara badge on the right.

Lehmann, born in 1987 and one of the young painters attracting much attention in Germany, was quoted as saying “An artist should have a stance in the current political and social phenomena and perform the role with responsibility, especially against populism or far-right ideologies that are prevalent in Europe these days.”

Some 70 of his paintings are on view at the three spaces until Sept. 18.