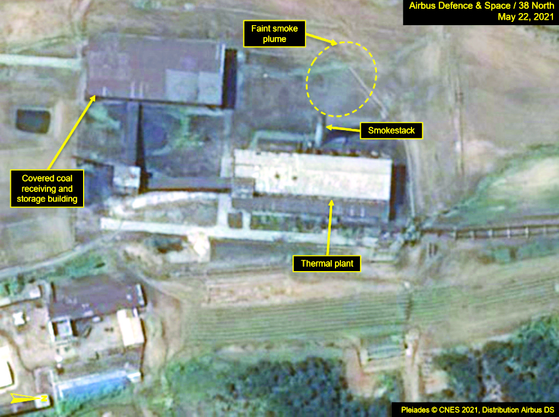 Satellite imagery released by the website 38 North shows activity at the radiochemical laboratory in North Korea’s Yongbyon nuclear complex on May 22. [38 NORTH]

“There were no indications of reactor operation from early December 2018 to the beginning of July,” said the report submitted to the International Atomic Energy Agency (IAEA) Board of Governors Friday, referring to the 5-megawatt reactor at the Yongbyon complex in North Pyongan Province.

“However, since early July 2021, there have been indications, including the discharge of cooling water, consistent with the operation of the reactor."

This could be the first time that the reactor, capable of producing weapons-grade plutonium from spent fuel rods, has been restarted in two and a half years, and comes at a delicate time as Pyongyang has remained mum to the Joe Biden administration’s offers of dialogue.

The five-month time-frame, it added, “is consistent with the time required to reprocess a complete core of irradiated fuel” from the 5-megawatt reactor.

“The DPRK’s nuclear activities continue to be a cause for serious concern,” said the report, referring to the acronym for the North's official name, the Democratic People's Republic of Korea.

The report said the “new indications of the operation” of the 5-megawatt reactor and the radiochemical laboratory at Yongbyon are “deeply troubling” and that the continuation of the North’s nuclear program is “a clear violation of relevant UN Security Council resolutions and is deeply regrettable.”

Yongbyon began operation in 1986. North Korea agreed to shut down its Yongbyon reactor in 2007 and allow UN nuclear inspectors back into country in exchange for aid amid six-party talks with South Korea, China, Japan, Russia and the United States. It blew up the reactor’s cooling tower in 2008 to show its commitment. However, Pyongyang eventually walked away from the negotiating table in 2009.

The Vienna-based IAEA issues the Application of Safeguards Report annually before a meeting of its member states. This report covers the period since the last one submitted to the board of governors in September 2020.

The IAEA has had no access to North Korea since its inspectors were expelled from the country in 2009. Pyongyang’s sixth and last nuclear test was in September 2017, which was followed by a self-imposed moratorium on nuclear and long-range missile testing since 2018.

Likewise, Boo Seung-chan, a spokesman of Seoul’s Defense Ministry of National, said in a briefing Monday that the South’s military is “closely monitoring North Korean nuclear-related trends in cooperation with the United States,” indicating an awareness of the North’s latest activities.

Some analysts view the activity at Yongbyon as a signal that Pyongyang may be raising its negotiating leverage ahead of any talks with the Joe Biden administration.

In the second summit between North Korean leader Kim Jong-un and former U.S. President Donald Trump in Hanoi, Vietnam, in February 2019, Pyongyang offered to “permanently and completely” dismantle all its nuclear material production facilities in the Yongbyon area, in the presence of U.S. experts, on condition that the Washington lifted some sanctions. The Hanoi summit collapsed after the United States insisted on additional measures. Denuclearization negotiations have been at a standstill since.

In a report to the ruling Workers’ Party congress in January, Kim detailed plans to possess “completely new nuclear capabilities.”

The Biden administration has proposed dialogue with Pyongyang on several occasions since February through the North Korean mission to the United States, or the so-called New York channel.

Likewise, U.S. chief nuclear negotiator Sung Kim offered Pyongyang dialogue, “anytime, anywhere,” without conditions in visits to Seoul both in July and again on Aug. 23 and also discussed possible humanitarian support to the North with his South Korean counterpart. However, Pyongyang has remained unresponsive so far.

The two Koreas restored cross-border communication lines on June 27, but the North has not been responding on the hotlines since Seoul and Washington began a 10-day summertime joint military drill on Aug. 16.

Pyongyang protested the joint drill, warning of a “serious security crisis.” Seoul and Washington concluded the annual exercise last Thursday. North Korea did not retaliate with any military provocation during the drill, such as a ballistic missile launch, as it has in the past.

In a statement Sunday, North Korea's Foreign Ministry again lambasted the drill and vowed to strengthen its “preemptive capabilities.”

The latest IAEA report also found that there were “indications of ongoing activities at the Kangson complex during the reporting period,” referring to an unreported facility in Chollima District of Nampo City in Kangson, seen by the intelligence community as a covert uranium enrichment plant.

It also noted that the Kangson site “shares infrastructure characteristics with the reported centrifuge enrichment facility at Yongbyon.”

In the Friday report, the IAEA director general called on Pyongyang to “resolve all outstanding issues, especially those that have arisen during the absence of Agency inspectors from the DPRK,” vowing to strengthen its ability to play a role in verifying the North’s nuclear weapons program.