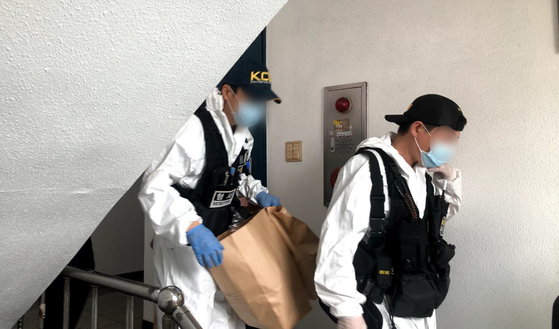 Police forensic investigators on Sunday leave the residence of a murder suspect who turned himself in and confessed to killing of two women. A body of a woman was found inside his home in Songpa District, southern Seoul, and the other in a car he drove to the police precinct to surrender himself Sunday morning. [NEWS1]


The Ministry of Justice and the police are under fire for their failure to stop a man with a lengthy criminal record from killing two women despite wearing a location-tracking ankle monitor.

Justice Minister Park Beom-kye issued an apology Monday morning, saying that the ministry’s monitoring system, which he had praised as a highly successful preventive program last month, had failed to stop a repeat sex offender from breaking free from his tracking device and killing two women last week.

“I offer my apologies to the people, that a man under our electronic monitoring system had committed cruel crimes,” he said. 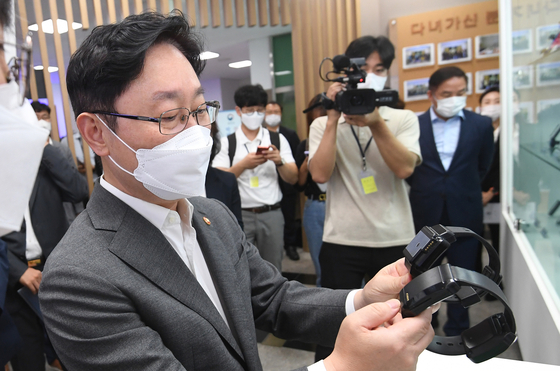 In this file photo, Justice Minister Park Beom-kye looks at location-tracking ankle monitors during his visit to the ministry's Central Monitoring Center in Dongdaemun District, eastern Seoul, on July 26. [YONHAP]


A 56-year-old man surnamed Kang turned himself in to the Songpa Police Precinct around 8 a.m. on Sunday and confessed that he had killed a woman on Thursday before breaking off his anklet on Friday and killing another woman earlier on Sunday.

Kang told the police that he decided to turn himself in because he knew he would soon be caught.

According to the Justice Ministry, Kang has a total of 14 criminal convictions, including rape and robbery. Two of the convictions are sex crimes.

Kang has been in and out of prison ever since he served his first prison term in 1982 when he was 17 years old, for robbery. He raped a passerby in his first sex crime in 1996, and his second sex crime was in 2005, just five months after he was released from prison. He robbed a woman and sexually assaulted her.

In 2006, he was sentenced to 15 years for the crime and completed his term in May this year.

Kang was ordered to wear a location-tracking ankle monitor for the next five years as he was a repeat sex offender.

According to the police and the Ministry of Justice, they were still looking for Kang, without knowing that he had killed anyone, when he surrendered himself to the police voluntarily on Sunday. The police put him under emergency arrest for murder that day.

According to the ministry, an alarm went off around 12:14 a.m. on Friday, signaling that Kang had violated a court order to stay inside his house at night, and a two-member team was dispatched from the Seoul Dongbu Probation and Parole Office to his house. Before the team arrived, Kang had already returned to his house around 12:34 a.m., so the team informed him that he would be questioned later. It was the third time that he violated the nighttime curfew since he had been released from prison in May.

Later, at 5:31 p.m. on Friday, Kang cut off his ankle monitor and ran away. The alarm sounded again due to the broken monitor, and the ministry and the police started a manhunt but failed to locate him until he showed up at the Songpa Police Precinct around 8 a.m. on Sunday.

Choi Gwan-ho, commissioner of the Seoul Metropolitan Police Agency, held a briefing on Monday and issued a public apology.

According to the police, Kang killed the second victim inside the victim's car and drove the car around in Seoul and Gyeonggi. The police have so far found no evidence to suggest Kang had an accomplice.

“We are going through his mobile phone to clarify his motives and crime methods,” Kim Seong-jong, head of the investigation department of the Seoul Metropolitan Police Agency, said Monday.

Kim said the police will ask a court to issue a formal detention warrant to hold Kang. The police will also make a decision later on whether to announce Kang's full identity or not.

The police admitted that the second murder might have been prevented if they had known that Kang had killed the first woman and arrested him as a murder suspect, instead of treating the case as a simple manhunt for a person who broke away from the electronic monitoring system.

After the ministry detected the alarm that Kang had cut off his anklet on Friday evening and fled, the police visited his empty house three times later in the day and two more times on Saturday.

The police, however, were unable to forcibly open the door and enter the house because they didn't have a warrant. At the time, the body of the first victim was still inside.

Seoul Police Chief Choi said it is regrettable that the police officers who initially responded to Kang’s missing alert were not more proactive. Choi also mentioned the law governing the police operation is very narrow, giving them little room for discretion.

Earlier Monday morning, Minister Park said the electronic monitoring system had its limits in preventing recidivism, blaming a lack of manpower and budget. He said the ministry will hold a briefing later in the day on how to improve the system.

Later in the day, Yun Wung-jang, head of the Crime Prevention Policy Bureau of the ministry, held a briefing at the Seoul High Prosecutors’ Office and promised to improve the system. Yun said the ministry will manufacture ankle monitors with stronger materials and cooperate better with the police for a speedy arrest of a runaway.

Since the introduction of the ankle monitors for repeat sex offenders in 2008, the ministry has upgraded the material of the anklet’s strap six times. The upgrades, however, did little to stop the wearers from destroying them and running away. This year alone, 13, including Kang, cut the monitors off, and two are still on the run.

Yun also said the government will seek stronger punishments for those who destroyed their ankle monitors. Currently, intentional destruction of the monitor is punishable by up to seven years in prison or a fine of up to 20 million won ($17,000), but offenders have often been punished with less than one-year prison terms.

According to the ministry, Kang was working as a door-to-door cosmetics salesman and frequently interacted with women customers since he was released from prison in May.

Because Kang’s second conviction for sexual assault was handed over in 2006, before the government introduced its public database of sex offenders in 2008, his identity was not on the system.