Minors and pregnant women to be eligible for vaccines in Q4

Minors and pregnant women to be eligible for vaccines in Q4 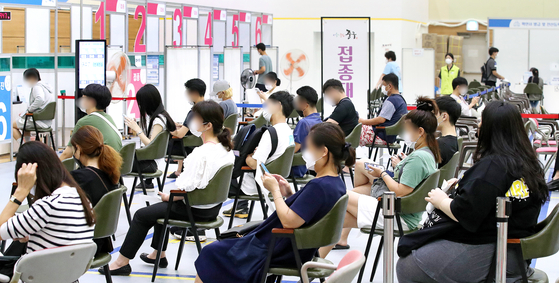 People wait to get a Covid-19 vaccine at a vaccination center in Jung District, central Seoul, on Monday afternoon. As of the previous day, 55.8 percent of the population have received their first shots of Covid-19 vaccines, with 28.5 percent being fully vaccinated. [NEWS1]


Korea will offer vaccines to minors aged 12 to 17 and to pregnant women in the fourth quarter, health authorities announced Monday.

The government also plans to give a booster shot, or an extra dose of a vaccine after the initial series of injections, to those who have been fully vaccinated for at least six months. Details of the schedule will be announced in September.

The country’s Covid-19 vaccination task force said Monday that it considered the plan following discussions with a committee of experts last week.

“The Korea Advisory Committee on Immunization Practices advised that pregnant women, and children and adolescents aged 12 to 17 who have been excluded from Covid-19 vaccinations can be vaccinated, and it advised administering another dose of the vaccine six months after the original inoculation [is completed],” Jeong Eun-kyeong, the commissioner of the Korea Disease Control and Prevention Agency (KDCA), said during a briefing on Monday.

About 270,000 pregnant women are subject to vaccination, and it is likely that they will get messenger RNA (mRNA) vaccines — Pfizer or Moderna, the KDCA said.

“Pregnant women are at higher risk for Covid-19 and have so far been confirmed to have no safety issues after vaccination in major countries, and [the committee] also recommended that they be included in the vaccination list in Korea,” Jeong said, citing similar moves in other major countries such as the U.S. and Britain as well as assessments made by the World Health Organization (WHO).

Local health experts have pointed out that vaccination for pregnant women who are at higher risk of Covid-19 should swiftly be considered amid the current fourth wave of infections.

The Korean Society of Obstetrics and Gynecology (KSOG) earlier conveyed its position that vaccination should be recommended, and health authorities have been reviewing inoculation recommendations based on overseas research.

According to data Rep. Kim Mi-ae of the People Power Party received from the KDCA, the number of pregnant, confirmed Covid-19 patients in Korea stood at 328 from Jan. 1 to July 17, and five were severe cases.

The severe illness rate, or the rate of critically ill patients among Covid-19 cases, was 1.52 percent in pregnant women, eight times higher than that of non-pregnant women aged 20 to 39 years old (0.19 percent) who were infected with the virus during the same period.

In addition, with the approval of Korea's Ministry of Food and Drug Safety, as well as efficacy and verification from the U.S. and Japan, Korea decided to include young people aged 12 and up in the vaccination scheme. So far, people aged 18 or above are eligible for a Covid-19 shot in Korea.

About 2.76 million people in the 12 to 17 age group are eligible, and the Pfizer vaccine will likely be administered since the Drug Safety Ministry recently lowered the age limit for the Pfizer vaccine from 16 to 12. Moderna’s vaccine can also be considered as permission changes are currently under way to lower the minimum age threshold to 12, health officials said.

"We are planning to decide the vaccine type after consulting experts,” the KDCA commissioner said.

The goal is to roll out vaccines for this age group after wrapping up inoculations for the 18-to-49 age group by the end of September, but the agency said they will announce a finalized plan next month.

Health authorities also announced that booster shots will be offered from the fourth quarter, starting October, for people who have been fully vaccinated for at least six months.

High-risk groups such as nursing home residents and employees and Covid-19 hospital employees will have priority for the boosters, similar to the first inoculation schedule. Yet officials say people with chronic illnesses and immunity deficiencies will be prioritized even before six months have passed.

“We considered the fact that antibodies were found to decrease and incidents of breakthrough infections rise after a certain period of time, as well as the spread of the Delta variant,” Jeong said.

The key to such new plans is the timely supply of vaccines.

“Around 9 million vaccine doses will arrive in the fourth quarter,” Jeong said. “Pfizer and Moderna vaccine supplies are left, and procedures for the approval of Novavax is still underway. We will make sure there is no disruption in vaccine supplies.” 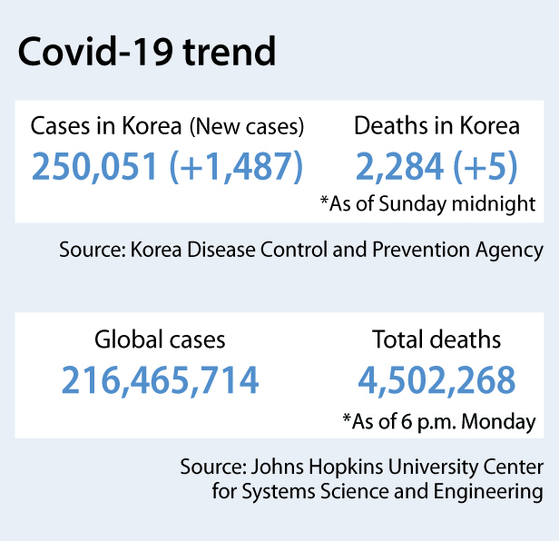 Minors will be free to opt out of their Covid shot