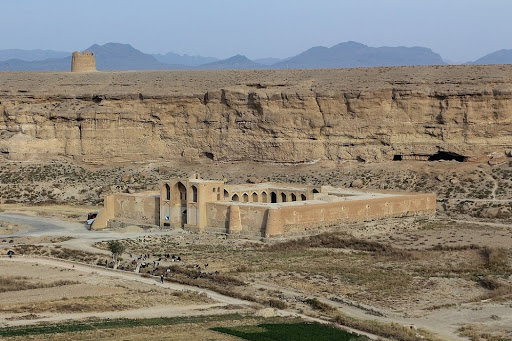 
The path that had transported silk and incense is occupied by shells and unmanned drones. Trucks filled with homemade bombs have pushed camels away. This is the story of Kabul, the capital of Afghanistan. Formed in the 6th century BC, Kabul had developed into a trade city on the Silk Road. The mountainous town at 1,790 meters (5,873 feet) above sea level could prosper thanks to the trade route.

For archeologists, Kabul and Afghanistan are like “the other side of the Moon.” It had become an inaccessible place due to invasions by Britain and the Soviet Union followed by the Taliban’s rule.

The ruins of the Silk Road in the area were specifically identified only recently. An international archeological research team from the U.S. and Afghanistan confirmed 4,500 sites and published information about them in the scientific journal Science. These ruins were not on official records and were abandoned in areas that archeologists could not reach easily.

Reconnaissance satellites of the U.S. Department of Defense and civilian satellites were used for the project. It is ironic that military strategic assets monitoring Taliban activities contributed to meaningful archaeological discoveries.

The most interesting discovery was the traveler’s quarters known as caravanserais. The research team found 119 caravanserais in the desert region of southern Afghanistan. The clay buildings were accommodations built for long-term travelers.

The researchers think hundreds of travelers and thousands of camels could rest in such accommodations. They also analyzed that the lodgings were related to the Islamic Safavid Empire established in Iran from 1502 to 1736. The Silk Road connecting Iran and India has been specifically identified.

The Silk Road where thousands of camels traveled is stained with blood once again. The death toll from the Kabul airport attack has risen to over 170. It is expected to be the largest casualty in a single terrorist attack since the September 11 attack in 2001, which sparked the invasion of Afghanistan.

Bloody retaliation is followed by more retaliation. The U.S. military has eliminated two high-level Islamic State Khorasan (IS-K) officials who orchestrated the airport attack. At the center of the path connecting the East and the West, humans are attacking humans. Is a war encompassing destruction and retaliation undeniable human nature? The broken Silk Road is asking.