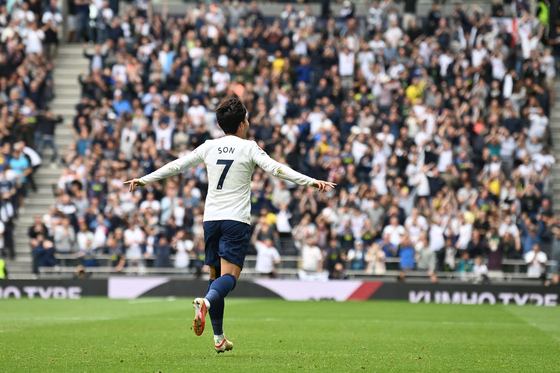 Tottenham Hotspur's Son Heung-min celebrates after scoring the opening goal during a match against Watford at Tottenham Hotspur Stadium in London on Sunday. [AFP/YONHAP]

Son's free kick came at the end of the first half. The Korean forward, who on the day became the first Asian-born player to appear in 200 Premier League games, found the back of the net with an unlikely free kick from just off the goal line that bounced in the box and sneaked past the goalkeeper. Son may have intended it as a cross, but intentional or not, the goal won the game and carried Spurs to the top of the table.

"As a free kick taker, you want to deliver the best ball to the guys going to the box," Son said after the game. "Obviously, I tried to hit the target if nobody touched it, which is what happened. I don't know why nobody touched it. I will take this goal. The goal is for the team."


Tottenham have played three games this season, winning all three 1-0. Son scored in the first game against Manchester City, but left the field early in the second game against Wolverhampton Wanderers, prompting injury concerns. He rallied quickly this week, proving there is no reason to be concerned about his fitness as he gets ready to rejoin the Korean team for a pair of qualifiers for the 2022 Qatar World Cup.

With 200 Premier League games — all with Spurs — under his belt, Son also commented on how it feels to be one of the senior players at the club.

"I try to help young lads," he said. "I try to enjoy that position right now. It's not all me. Everyone wants to be a leader in the changing room and off the pitch. That's a good sign. Let's keep doing this."