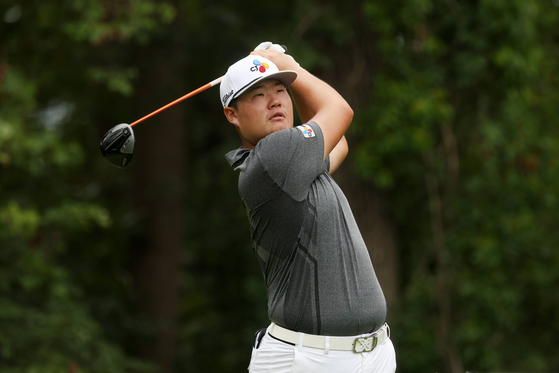 Im Sung-jae plays his shot from the fifth tee during the final round of the BMW Championship at Caves Valley Golf Club on Sunday in Owings Mills, Maryland. [AFP/YONHAP]


Im Sung-jae took third place at the BMW Championship on Sunday, stamping his ticket for a third successive Tour Championship while countrymen Lee Kyoung-hoon and Kim Si-woo failed to extend their seasons.

At Caves Valley Golf Club in Maryland, where the BMW Championship took place, Im fired a 5-under 67 on the last day to finish four shots behind the playoff duo of Patrick Cantlay and Bryson DeChambeau of the United States, with Cantlay birdying the sixth extra hole to win his third title of the season.

Im's third place finish moves him up from No. 25 in the FedEx Cup standings to No. 12, setting him up for the crowning event of the PGA Tour. Im's move was the biggest in the top 30 from the BMW Championship.

Compatriot Kim also narrowly missed his chance, finishing in a shared 29th position at the BMW Championship and in 34th on the FedExCup standings, four shy of getting into the top 30.

The Tour Championship contenders start with a score already bolstered by their FedEx Cup standings. No. 1 Cantlay is in pole position starting the tournament 10 under, runner-up Tony Finau of the United States 8 under and No. 3 Bryson DeChambeau 7 under. No. 12 Im will start the tournament at 3 under alongside four other players including defending champion Dustin Johnson from the United States.

The elite 30 will start their race to the season's ultimate prize, the FedEx Cup on Friday.