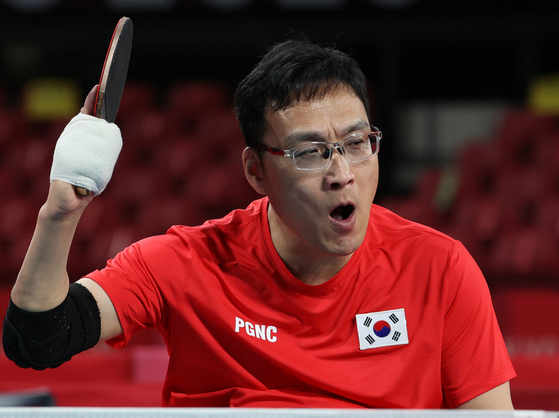 Joo Young-dae celebrates after beating Kim Hyeon-uk in the gold medal match of the men's singles class one table tennis tournament at the 2020 Tokyo Paralympics. Joo is Korea's first gold medal winner at the Games. [YONHAP]

Kim took silver and Nam Ki-won took one of the two bronze medals available in the event, ensuring Korea won a medal of every color in men's singles class one. Thomas Matthews of Great Britain won the other bronze medal.

Joo beat Kim 3-1 in the gold medal match, winning the first two games 11-8, 13-11. Kim rallied impressively in the third game, beating Joo by a huge 11-2, before the tables turned again in the fourth game and Joo took a 12-10 win to lock in the medal.

Joo's victory doesn't come as a surprise. The world No. 1 was the favorite entering the tournament and remained on good form throughout. Kim, ranked at No. 5 in the world, defied the odds to take silver. Nam, the world No. 3, takes a comfortable bronze medal, while world No. 8 Matthews will also likely enjoy a ratings boost with his medal.

There are 11 classes in Paralympic table tennis. Class one is a wheelchair class for athletes with no sitting balance and a severely affected playing arm.

The Korean table tennis team have been on strong form at the Tokyo Paralympics, with one gold, two silver and six bronze medals so far. Seo Su-yeon won the other silver in the women's singles class one to two on Saturday.