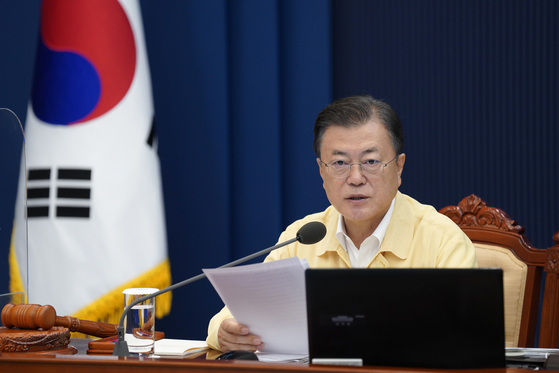 President Moon Jae-in announces the 2022 budget proposal during a cabinet meeting on Tuesday at the Blue House.[YONHAP]

The government proposed a 604.4 trillion won ($518 billion) budget for 2022, the last budget for the Moon Jae-in administration.

It is the first national budget to exceed 600 trillion won, and would represent an 8.3 percent increase over this year’s.

In its announcement Tuesday, the government said it is designed to expand the social safety net, help small businesses affected by the pandemic, and invest in such future priorities as carbon neutrality.

Spending on health, welfare and employment continued to make up the largest portion.

The government proposed spending 216.7 trillion won in those areas, an 8.5 percent year-on-year increase.

Spending on health, welfare and employment has never exceeded 200 trillion won before. That spending accounts for 35.9 percent of the entire budget.

The budget includes a new 30 percent tax credit for single parents. as well as expanding monthly subsidies for families with children to include eight-year-olds -- currently the subsidy is only for children up to the age of seven -- and 2 million won payments to people who have newborns.

Additionally, 23.5 trillion won will be earmarked for assistance to young people. Part will be used to help them get jobs (5.5 trillion won), pay for housing (6.3 trillion won) as well as for education and cultural activities (9.7 trillion won).

In the health budget, the government plan to spend 3.5 trillion won on vaccine-related programs including for teens.

Some 2.6 trillion won will be used to buy mRNA Covid-19 vaccines.

300 billion won will be used to help people cope with the so-called Covid-19 blues, including counseling for people in low-income families.

The budget for R&D will amount to 29.8 trillion won including 511.7 billion won for projects developing vaccines and treatments against Covid-19 variants.

Some 3.6 trillion won will be used on New Deal R&D.

The defense budget is proposed at 55.2 trillion won, a 4.5 percent year-on-year increase. Enlisted soldiers will be getting bigger paychecks.

During a cabinet meeting on Tuesday, President Moon  stressed the importance of continuing an expansionary fiscal policy for a full economic recovery next year.

“Last year and this year we have experienced the effects of expansionary fiscal policies,” Moon said.

“The aggressive fiscal policies stimulated investment,” Moon said. “[Thanks to the aggressive spending] we were the first among advanced countries to recover and enjoyed the strongest recovery.”

Moon said spending is important to transform Korea into an economy that leads rather than following other advanced countries.

The president downplayed worries of about budget deficits and the national debt. He said a rapid economic recovery will create a cycle that would help increase the taxes collected, giving more room for the government to spend.