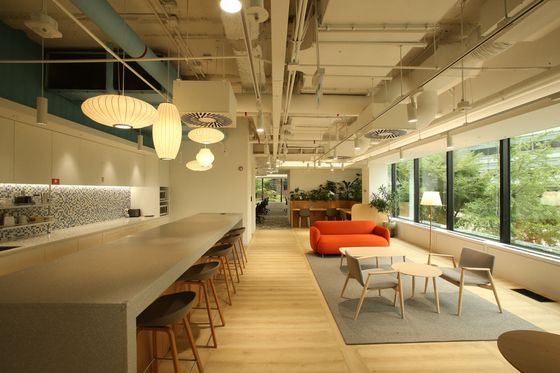 HSBC Korea has refurbished its local offices to make them better structured for flexible and collaborative work.

The new spaces in its main branch in Jung District, central Seoul, include various areas where employees can work and rest, including a cafe, private rooms and a room that has standing desks. Employees are able to work where they are most comfortable.

The change is part of HSBC’s Future of Work strategy being implemented globally. Under the program, the London-headquartered bank is aiming to slash office space internationally by making some jobs permanent work-at-home positions.

HSBC Korea, which has been in the country since 1897, is pursuing a hybrid working model, which is not just about where employees work, but also about how and when they work, according to HSBC Korea. It aims to offer a healthy corporate culture that promotes flexible working practices, collaboration and employee well-being.


The bank has been steadily reducing its presence in Korea for years. It abandoned retail banking in the country in 2014 and exited fund administration locally in 2020.

The new office will help its employees to work at their best, which will eventually improve customer service, HSBC Korea said.

To celebrate the innovation, HSBC Korea held an opening ceremony on Monday at its offices in Jung District, central Seoul.

“For more than 120 years, HSBC Korea has grown supporting the growth of the Korean economy. It has become one of the most successful foreign banks in Korea through constant innovations,” said Jung Eun-young, president and CEO of HSBC Korea. “Now, we look to another 100 years of success with the new ways of working.”