SK Global Chemical rebranded itself Tuesday with a new company name and a greener business model.

The company's new name, SK Geo Centric, is being adopted 10 years after it was spun off from SK Innovation as a wholly owned subsidiary. It is promising to lead in the plastic waste recycling business.

“SK Geo Centric will vie for eco-friendly innovation with the earth at its center,” said Na Kyung-soo, the company's CEO in a press conference Tuesday.

“By extracting oil from plastic waste, which are made from oil," he said, "the company wants to become the world’s biggest urban oilfield.”

As a result of the investment, SK Geo Centric will have facilities that can recycle 900,000 tons of plastic waste per year. That is on par with the company’s annual production of plastics in Korea.

By 2027, SK Geo Centric will have facilities that can recycle 2.5 million tons of plastic waste per year, which, according to the company, translates into 20 percent of plastic waste that enters the oceans every year.

“The recycled plastic market is expected to grow by 12 percent every year until 2030,” Na said. “In 2025, the company plans to generate 600 billion won of Ebitda [earnings before interest, tax, depreciation and amortization] margins from the company's eco-friendly and recycling business.”

SK Geo Centric has been active in forming partnerships with global tech companies with plastic recycling technology. Last month, the company joined forces with Nasdaq-listed PureCycle Technologies, which has a solvent-based proprietary technology for recycling polypropylene, a plastics often used for containers. The two companies will build recycling facilities in Korea from next year with a plan to start operation by 2025.

In June, the company acquired 10 percent of Canada-based Loop Industries for $56.5 million, which specializes in breaking down what was previously unrecyclable polyethylene terephthalate or PET.

Such partnerships will continue to expand, SK Geo Centric said. 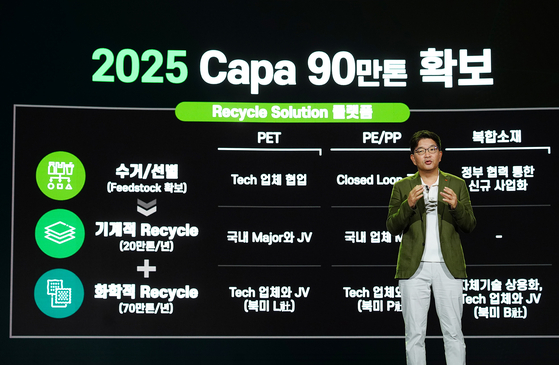 SK Geo Centric will also work with municipal governments and small and mid-sized enterprises in Korea to improve the sorting of plastic waste.

"The sorting of plastic waste from households is done by small companies in not very good environments," said Kang Dong-hoon, head of the company's Green Business Group. "We are planning to help them by applying artificial intelligence and digital transformation technology so they can better categorize plastic waste.

"Helping them improve their capacity to sort plastic waste will also help us because we can collect more and better waste to recycle."

When asked about the possibility of going public, CEO Na said, "Going public will be possible when this business doesn't stop at being just 'good' but also gets recognized by the market as a tangible business."