'Anti-Google law' passes, to be effective in 15 days

'Anti-Google law' passes, to be effective in 15 days 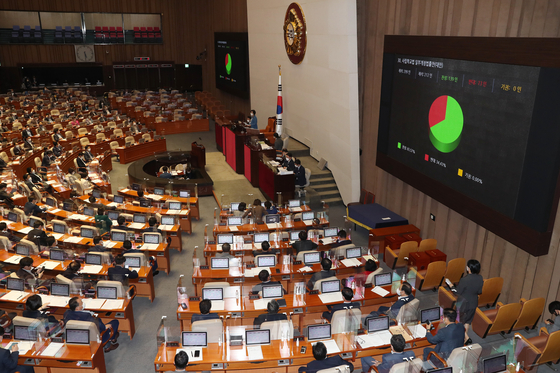 The ″Anti-Google law,″ or the a revision of the Telecommunications Business Act, passed the National Assembly’s on Tuesday, making Korea the first country to prohibit app market operators from enforcing in-app purchase systems. [YONHAP]


The “Anti-Google law” passed in the National Assembly on Tuesday, making Korea the first country to prohibit app stores from limiting payment options.

The bill, a revision of the Telecommunications Business Act, was passed by the Legislation and Judiciary Committee last Wednesday. It was voted on Tuesday evening during the plenary session.

Of the 188 representatives present at the meeting, 180 voted for and zero against, while eight abstained.

The bill will go into effect in 15 days. It will bar app-store operators like Google and Apple from requiring the use of specified billing systems for in-app purchases.

App users will be allowed to use the payment system of their choosing, and app operators will not be required to pay the app market operators commissions.

The bill originally included other measures that were taken out after a review by the judiciary committee, such as prohibiting app market stores from forcing developers to register their work only on their platforms, because the Fair Trade Commission already has similar regulations.

The bill has been one of the biggest issues in the IT industry this year. It was put forward by parliament representatives to protect local app developers after Google announced last July that it would charge a 30-percent commission on all in-app purchases.

Google's new in-app purchase system was scheduled to take effect in October. The bill will make this impossible to implement in Korea.

Without the bill, Google's new policy would have cost Korean firms an additional 156.8 billion ($136 million) won a year, according to a report by the Ministry of Science and ICT released in February.

Apple had already been mandating all apps to use its own billing system and taking 15 to 30 percent commissions from gross sales.

After facing lawsuits from app developers on monopolized distribution of iOS apps and in-app purchases, Apple on Aug. 26 said will allow app developers to email their users about alternative purchase options. However, no in-app notifications can be sent.

“We hope that the revision of the Telecommunications Business Act will create a fair app ecosystem where the rights of creators and developers are ensured and users are provided with diverse content at cheaper prices,” said Park Seong-ho, chairman of the Korea Internet Corporations Association (K-Internet). K-Internet has been one of the most vocal organizations on the in-app payment issue.

"Just as it costs app developers to make apps, it costs Google to maintain its operating system and establish and manage an app market," Google Korea said in a statement. "Google will come up with a business model that can ensure both a high-quality operating system and app market while also abiding by the new law and will share the details in the coming days."