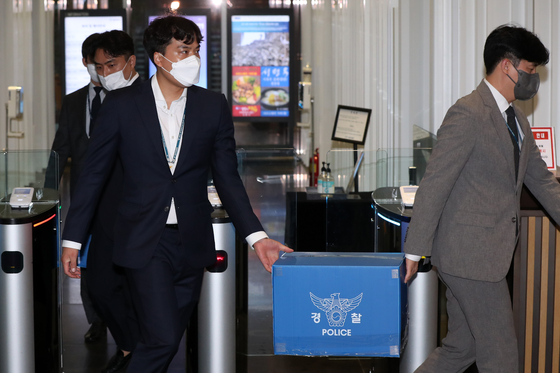 Police raid Seoul City Hall on Tuesday after receiving a complaint that Mayor Oh Se-hoon made false comments about his office's involvement in the Phi City development scandal which unfolded between 2006 and 2011. [NEWS1]


Police raided Seoul City Hall on Tuesday after receiving a complaint that Mayor Oh Se-hoon made false comments, during a television debate leading up to the mayoral by-election in April, about his office's involvement in a development scandal.

Police are reportedly collecting data from the bureau that date between 2006 and 2011 and are related to irregularities in the licensing process for the Pi City development complex in Yangjae-dong of Seocho District, southern Seoul.

Police launched their investigation after receiving complaints that Oh's remarks at the April by-election debate, where he claimed the development had nothing to do with his previous tenure as mayor, violated the Public Official Election Act by containing false information.

The Pi City development was mired in controversy after it came to light that the chairman of the developer, Lee Jeong-bae, had bribed prominent government officials in the Lee Myung-bak administration, including then-Office of Public Information Chief Choi See-joong and Knowledge Economy Minister Park Young-jun, to obtain the necessary land-usage license for the project.

The site of Pi City was formerly a cargo warehouse and terminal whose previous owner went bankrupt during the Asian financial crisis in 1997.

Defending the mayor, a city official who spoke on the condition of anonymity, said, “The mayor made the comments at the debate relying solely on his memory.

“[The police] could have confirmed the necessary information well before the raid. By conducting a search-and-seizure operation, they are making out [Oh’s comments] to constitute some kind of massive criminal conspiracy.”

The source also called the raid “politically motivated against a regional government chief hailing from the opposition party,” adding that the mayor’s comments merely indicated he was “not involved in any illegal activity regarding the development’s licensing process.”

However, the license for the development was issued by the city in November 2011, while Oh was serving his first term as Seoul mayor.

The city official argued that although the the size of the Pi City development was reviewed by the Seoul city government’s city planning committee and building committee, final approval and construction permission for the project was issued by the Seocho District Office.

Police are investigating whether Oh's debate remarks, which denied involvement in the development during his tenure, constituted a false public comment under the Public Official Election Act, considering the circumstances in which the city planning committee and building committee deliberated the project.

Despite the approval of a change in its land usage license registration, the development was eventually canceled after the developer failed to obtain the necessary loans to fund construction.