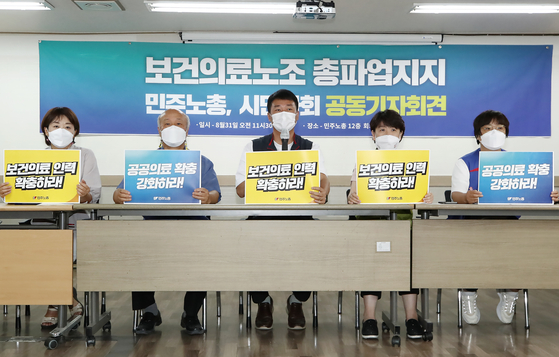 Members of the Korean Confederation of Trade Unions, associated with the Korean Health and Medical Workers' Union, hold a press conference in Seoul on Tuesday to support the union's planned walkout on Sept. 2. The union of medical workers will launch a strike to call for the government to expand public medical services and increase the number of medical workers. [YONHAP]


Unionized nurses and other health care workers plan to go on a nationwide strike this Thursday, after 12 rounds of negotiations with the government ended without reaching an agreement.

According to the Ministry of Health and Welfare, the government and the Korean Health and Medical Workers' Union (KHMU) held their 12th round of working-level negotiations from 3 p.m. Monday until 5 a.m. Tuesday, but failed to come to any conclusions on key issues.

“We have reached a consensus on the bigger picture, but the two sides had differing opinions on the specific levels of agreement,” Health Minister Kwon Deok-cheol said in a public statement Tuesday.

The KHMU earlier warned of staging a walkout on Thursday, Sept. 2, and demand an expansion of public health care resources and infrastructure as well as improved working conditions.

Last Friday, the union said they polled its members and found nearly 90 percent of the votes cast were in favor of the strike.

The warning of the strike comes as the union has continuously demanded improvements in the poor working conditions and hefty workloads that have been exacerbated by Covid-19 pandemic, but they said no follow-up measures have been announced yet.

During the 14-hour-long marathon negotiations, the two sides reached an agreement on most items on the agenda, but failed to agree on on five costly items, including expanding manpower and public health care.

“The establishment and expansion of public hospitals is a project that requires the will of each local government and involves a considerable amount of financial resources,” Kwon said. “We propose making a consultative body to come up with specific measures and pushing for consultation with related ministries.”

Responding to the request for more manpower, Kwon said, “I sympathize with the demands such as improvements in manpower criteria and the nursing rating system.”

However, he added, “It is difficult to agree on whether to implement it immediately and specify the timing, as we need to consult with the persons concerned, create policy conditions and comply with legal procedures.”

With two days left until the planned strike, there is still a chance that the two sides could reach a dramatic agreement.

Lee Chang-joon, director-general for health and medical policy of the ministry, said, “The two sides decided to further discuss whether there are any additional modifications that can be made after an internal review, and we need to contact each other to schedule [the review] this afternoon or tomorrow."

If negotiations fail again, the union plans to stage a strike from 7 a.m. Thursday, with about 16,800 members — or 30 percent of the union — participating, excluding the essential personnel such as those in emergency rooms and intensive care units.

Doctors also will not take part in the action, but concerns have been voiced that such a strike could strain the country's health care system as the country battles its worst wave of Covid-19.

"The strike […] will cause disruptions in treating Covid-19 patients by immediately increasing patients waiting for treatment and delaying the transfer of critical patients,” the minister said, urging against the strike.

“In this grave situation amid the fourth wave of Covid-19, we request collective movements such as strikes to be restrained, and the current situation be resolved together through talks and consultations,” Kwon added.