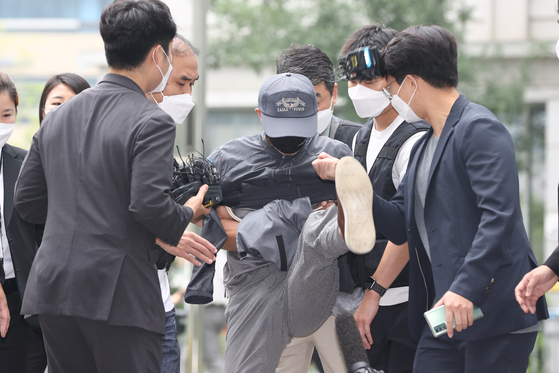 A murder suspect on Tuesday kicks reporters on his way to a warrant hearing at the Seoul Eastern District Court. [YONHAP]


A local court on Tuesday issued a warrant to the police to detain a murder suspect who confessed to killing two women before and after cutting off his location-tracking ankle monitor.

A 56-year-old man with a lengthy criminal history turned himself in to the Songpa Police Precinct on Sunday and confessed that he had killed two women. The suspect, surnamed Kang, told the police that he had killed a woman inside his house in Songpa District of southern Seoul on Thursday, broke free from his ankle monitor on Friday and killed another woman earlier on Sunday.

Following his confession, the police discovered the first victim’s body inside his home and the second victim's body inside the car that he drove to the police precinct.

After an emergency arrest and initial interrogation, the police on Monday requested the Seoul Eastern District Court to issue a formal detention warrant.

The warrant hearing took place Tuesday morning, and the court granted the request in the afternoon, calling Kang a flight risk.

Kang left Songpa Police Precinct to attend the hearing around 9:51 a.m. on Tuesday, wearing a gray-colored baseball cap and a black facemask. His hands were in handcuffs.

As reporters asked him questions, Kang responded violently, shouting “Reporters must do their job right!" He also kicked a reporter’s microphone, knocking it to the ground.

After he arrived at the district court and as he was on his way to enter the building, Kang again kicked some reporters and violently pushed his body against them. He also shouted profanities at the reporters. Court guards dragged him into the building.

His warrant hearing lasted about an hour. As he left the court around 11:20 a.m., Kang told the reporters that "I only regret that I didn't kill more people."

Kang, who has 14 criminal convictions, was released from prison in May this year after serving a 15-year prison term for robbery and sexual assault. Despite his two sex crime convictions including rape, Kang was working as a door-to-door cosmetics salesman and frequently interacted with women customers ever since he was released from prison in May.

The Songpa District Office, however, was not aware of Kang's salesman occupation. Kang apparently did not notify the government about his new job in order to hide his income and receive subsidies.

Kang was ordered to wear the electronic monitoring anklet for the next five years since he was released in May, but he broke it off and ran away around 5:31 p.m. on Friday.

Both of Kang’s victims were said to have been his acquaintances. Kang told the police that he killed them for money.

Search is on for unsolved crimes linked to taxi murder

Husband confesses to murder of wife, two sons in Gwangmyeong

In many Korean murders, it's all in the family