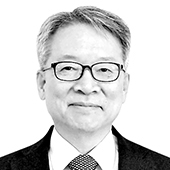 Huh Woo-sung
The author is a professor of emeritus at the Kyung Hee University.


Money usually bears the image of historical figures to best represent identity and history. The figures on banknotes or coins commonly achieved unity in their society.

The most recent figure on Korean money is Admiral Yi Sun-shin (1545-1598), who defended the country from Japanese invasions during the Joseon Dynasty. His portrait is on the face of the 100 won ($0.09) coin. Yi Hwang on the 1,000 won ($0.9) bill was a renowned Confucian scholar in the dynasty. Another Joseon scholar Yi Yulgok is on the 5,000 won bill, and King Sejong is on the 10,000 won note. The 50,000 won bill, first issued in 2009, has the first woman — Shin Samidang. Korea’s Founding President Syngman Rhee is the sole president on a banknote. But the note disappeared after his fall in 1960.

Over 100 million Koreans have lived on this land since Admiral Yi over 400 years ago. But no other name has appeared on our currency. This is unprecedented among over 200 countries in the world. The country’s extraordinary historical factors may have played a part. The Joseon Dynasty was declining from the 17th century and came to its end with the Japanese colonization in the early 20th century. The later ancestors were held accountable for failing to defend their nation. Internal division was another factor. In 2007, the Bank of Korea chose Kim Gu — the great independence movement leader and a nationalist — as the face for the 100,000-won bill, which was not printed. But the plan was put off. Debate over ideology could have been a reason.

Greenbacks and U.S. coins mostly have the founding fathers and presidents. Thomas Jefferson is on the nickel, George Washington on the $1 bill, and Abraham Lincoln on the penny as well the $5 bill.

On the Japanese banknotes since 2004, intellectual and literary figures of the 19th and 20th centuries appear except for the 2,000 yen note, which suggests its pride in modern history and academic achievement. Chinese currencies bear Communist Party leaders like Mao Zedong.

India is a multi-racial and multi-language state, but all of its currency notes bear Mahatma Gandhi’s face. The anti-colonial nationalist and political ethicist who employed nonviolent resistance to achieve independence from British rule had the engaging character and political power to unite a severely stratified society.

Lincoln also was a symbol of unity and engagement. In his second inaugural speech, the great orator famously said, “With malice toward none, with charity for all … let us strive on to finish the work we are in, to bind up the nation’s wounds,” 40 days before he was assassinated shortly before the end of the Civil War in 1865. Instead of a war-winning speech, Lincoln pleaded for harmony and unity among Americans. He had been sympathetic towards the southerners and brought on political opponents to the cabinet.

In his inaugural speech four years ago, President Moon Jae-in promised of national unity. He was undoubtedly serious at the time. But soon, he used omnipotent power to dominate economic, diplomatic and defense policies. Ruling party members flocked together without any individuality. People became divided and vented at one another in contempt and hatred. Malicious internet postings can be poisonous to the society by intimidating individual freedom and self-respect.

Anyone who aspires to become a leader must promise national unity. For unity, one must accept the opponents and find a middle way through dialogue. The realistic demand for a centrist comes for two reasons. First, Koreans can be unpredictable in the direction and scope of their actions. No ideological front can be perfect. The real estate policy failure makes a good example. Foreign policy also should be centrist to earn credibility from other governments. Second, since the conservatives and liberals are similar in their power, one particular camp cannot fully prevail. Only centrism can be a symbiotic path.

To accept the other party and keep up dialogue, we must combat inner rage and apathy. Gandhi prayed daily to build compassion and peace. The Dalai Lama, the spiritual leader of Tibet’s government-in-exile, preaches on repeated exercise of meditation for trust and compassion. He believes the repeated prayer and meditation can change the opponent.

We pray the next president ushers the country to a centrist path.