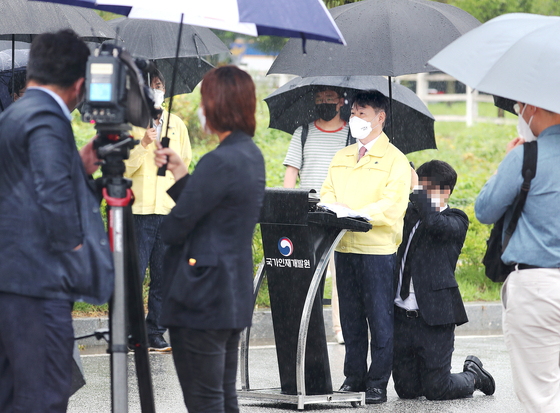 A Justice Ministry official kneels down to hold an umbrella for Vice Justice Minister Kang Sung-kook during his speech on a rainy day earlier this week. ﻿ [YONHAP]

PARK HAE-RI
The author is a political and international planning team reporter of the JoongAng Ilbo.


The meaning of protocol is different for bureaucrats. If they do well, they lose nothing. If they fail, they get crushed. For an event that leads to a dinner meeting, restaurant service is the main protocol. It is a common sight to see civil servants pick up and carry food from the kitchen at a hand gesture of the team leader. “The skepticism I felt every time was something I had to swallow by myself,” said Lee Ji-young, the author of the book “I am a grade nine civil servant.”

Protocol, which started as a diplomatic term, describes the norms that are supposed to be observed. But it is deeply rooted not only in diplomacy, but in bureaucratic society, politics and corporate culture. As a result, Korea has become a “republic of protocol.” Protocol has become the yardstick to show off the power of senior officials and the pretentious formalities that junior officials must follow so as not to displease their bosses. A new toilet was even installed for former President Park Geun-hye, and a former prime minister’s official car was allowed to drive onto the KTX platform.

The National Assembly shouldn’t be excluded when when it discussing excessive protocol. Its protocol is intimate and commonplace, as it is commonly referred to as the “guard of the mood.” A former party head who valued protocol was notorious for not even squeezing his own toothpaste. Eyewitness reports of him nonchalantly holding out a toothbrush and someone squeezing toothpaste onto it circulated among reporters. When rumors spread that one party official satisfied a picky floor leader with thorough protocol, the opponent party leader was envious and said, “Why can’t we do that?”

Recently, a photo became controversial. A staff member knelt down and held an umbrella behind the vice justice minister who was giving a briefing in the rain. Cameramen at the scene reportedly demanded the staff employee an umbrella not appear on camera. But a video from the scene captured the moment. No one tried to help him up from kneeling on the wet ground.

The message from the case is clear. The excessive protocols our society takes for granted must stop. A new social atmosphere should be created so that nobody feels ashamed. How about starting with holding your own umbrella?