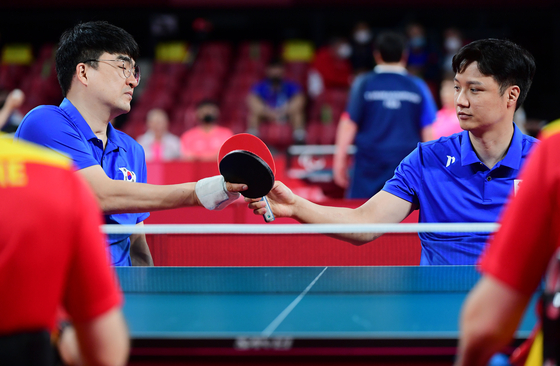 
A busy day is underway for the Korean table tennis team at the 2020 Tokyo Paralympics, as a total of five quarterfinal matches were scheduled at the Tokyo Metropolitan Gymnasium tables for Tuesday.

In the early afternoon, Kim Seong-ok, Lee Kun-woo and Moon Sung-keum fell 2-0 to France's Thu Kamkasomphou and Anne Barneoud in the women's team classes six to eight. The 52-year-old Kamkasomphou, who is making her sixth consecutive Paralympics appearance in Tokyo, proved to be a force to behold, contributing to a 3-2 win in the doubles match then taking down Moon in straight sets.

Five tables away, Park Jin-cheol and Cha Soo-yong took down Spain's Iker Sastre and Miguel Toledo Bachiller 2-0 in the men's team classes one to two. The doubles match went on for a grueling 42 minutes, but Korea managed to prevail 3-2. Park used the momentum to end with a 3-1 win over Sastre.

There are 11 classes in Paralympic table tennis: Athletes in classes one to five compete in a wheelchair, while those in classes six to ten do so standing. Korea has so far won 10 table tennis medals in Tokyo.