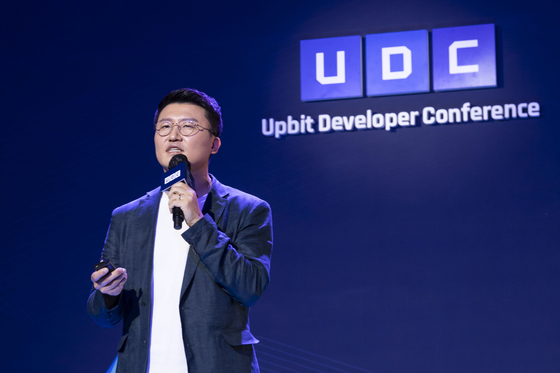 
Jin has been in charge of consulting for 30 blockchain projects over the last three years, and one of his recent projects was consulting for Bank of Korea with its CBDC project as a project manager.

A CBDC utilizes technology to represent a country's fiat currency in a digital form. Unlike decentralized cryptocurrencies like bitcoin, the CBDC would be centralized and regulated by a country's monetary authority.


Major central banks started looking into the potential of CBDCs as their answer to cryptocurrencies, which are volatile and largely beyond their control.


"A CBDC has a big advantage in terms of increasing efficacy of financial policies," Jin said. "For instance, think of if the government was to distribute emergency relief in CBDCs through individual digital wallets."


According to Jin, such a practice could ensure safe and efficient distribution of government funds. As CBDC is based on blockchain technology, where government's funds and donations have been used can more transparently be tracked and monitored.


He also introduced examples of how existing financial products like funds and bonds could be innovated in coordination with CBDCs.


CBDCs could help in the creation of automated investment products.


According to Jin, there is a possibility that within a digital wallet, one can set certain investment rules and the funds could be automatically invested into different investment products, like stocks and bonds when certain conditions are met.


Jin said the digital wallets should be able to handle multiple assets, including CBDCs as well as other digital assets like stablecoins, and also be interoperable with financial services offered by multiple institutions.


Another key issue to be figured regarding CBDCs is the Big Brother issue.


"The digital currency can violate privacy," Jin said. "The central bank is considering how to technically and legally solve this problem."


The central bank said in May that issuing CBDCs is not going to come in the very near future, however it is researching on the subject to be ready for the future.


Jin said the bank has actually been working on the currency over the last three years.


In August, it started a pilot project to test the CBDC by selecting Ground X, Kakao's blockchain technology subsidiary, with a budget of 4.96 billion won ($4.3 million). Ground X is partnering with KakaoBank, Kakao Pay and New York’s ConsenSys in pursuing the project.


"Global central banks are racing to come up with CBDCs, in somewhat similar races countries engaged in in the 60s and 70s when preparing for space projects," Jin said. "The major reason is because China is so keen on issuing CBDCs."


China is planning on issuing CBDCs as early as 2022, and United States is planning on unveiling its CBDC by 2023, according to data provided by Jin.