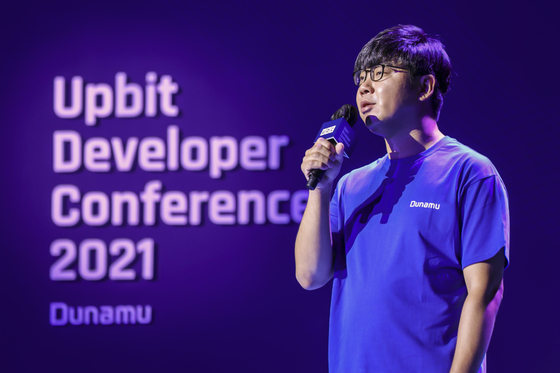 
The blockchain business is becoming larger and more sustainable, according to Song Chi-hyung, chairman of Dunamu, which operates Upbit, during the Upbit Developer Conference (UDC) 2021 held online on Wednesday.

The annual conference, now in its fourth year this year, brings together blockchain developers to discuss the industry's potential while also examining the changes the distributed ledger technology has already brought to daily lives.

“This year was very important,” Song said during his opening remark at the conference. "The market capitalization of digital assets that was around $200 billion when we first started this conference in 2018, has ballooned by over 10 times to roughly $2 trillion."

The Dunamu founder added that it is not only the numbers that are significant.

"Decentralized finance (DeFi) applications are steadily growing both in terms of quantity and quality, and non-fungible tokens (NFTs) that were considered only a thing for maniacs are becoming widely accepted, especially in the arts and collectibles market, opening up new potential for creators," he said.

DeFi refers to a system where software written on blockchain makes it possible for buyers, sellers, lenders and borrowers to interact with a strictly software-based middleman rather than going through traditional financial intermediaries like banks or brokerages. The system enables a more efficient and transparent financial transaction, supporters claim.

NFTs are unique tokens that can't be replaced with something else. The concept is rapidly gaining traction in the arts, games and entertainment, with NFTs used as a digital representation of the ownership of real-world arts, music, video clips and even in-game items that are often offered in limited quantities.

"We are also looking towards a nearing deadline for virtual asset service providers to register in September," Song said, referring to the requirement for registering with the government. "Various virtual asset business operators including Dunamu have either completed or in the process of preparing for this."

Local virtual asset providers have until Sept. 24 to register as virtual asset business operators with the Korea Financial Intelligence Unit, the body under the Financial Services Commission (FSC) responsible for implementing anti-money laundering practices in Korea, under an amendment to the Act on Reporting and Using Specified Financial Transaction Information that went into effect in March.

As discussions on the regulatory frameworks for the cryptocurrency market become active, Song said the "blockchain industry is passing through a phase for new leap in terms of size, its offerings and sustainability."

The Dunamu chair said that he hopes the conference becomes a companion for blockchain developers who have gone through rapid growth and changes in the market.

With NFT becoming the hottest issue of the 2021 blockchain industry, Dunamu has dedicated the first day of its two-day conference to NFT discussions through four separate sessions.

Zirlin of Sky Mavis, which operates a Pokemon-like questing and battle game Axie Infinity, explained how NFTs have been utilized in the game and contributed to creating a new digital economy within the game, based on a play-to-earn model.

“Our secret is that we use cryptocurrency and blockchain to turn our game into a real digital economy," Zirlin said. "There are people all over the world earning money by playing this game, even ditching their jobs in the real world to become full-time creators on Axie.”

Sebastien Borget, chief operating officer and co-founder of blockchain-based gaming platform The Sandbox, described the scalability of NFTs based on the metaverse world implemented in its game.

Issues of enterprise solutions, payments, DeFi and CBDCs were also briefly touched on during first-day sessions.

Marek Olszewski, chief technology officer and co-founder of Celo, explained how it is enabling DeFi applications to be accessible to anyone with a mobile phone using its open-source blockchain platform.

Arthur Breitman, council member of Tezos Foundation, delivered a talk on the growth and vision of its Tezos open-source blockchain protocol, which is based on a proof-of-stake consensus mechanism rather than mining.

On the second day of the event, Sheffield of Visa will open the conference by explaining the five trends of the cross-border crypto economy that are different from the existing paper money economy, according to Dunamu, and how Visa is connecting the crypto ecosystem as well as financial institutions and merchants.

Lee Sirgoo, CEO of Dunamu, will take the closing stage joined by Kim Tae-hoon, a pop columnist and presenter of the conference, by reviewing the major discussions held during the conference.

The conference was first held in September 2018, after the bitcoin market had crashed earlier that year, and since then has been held annually. Last year was the first time the event went online, due to the coronavirus pandemic.

According to Dunamu, it has had participants from more than 600 companies and 7,000 attendees over the past three events. This year, the event attracted 8,000 registrations, more than double last year.