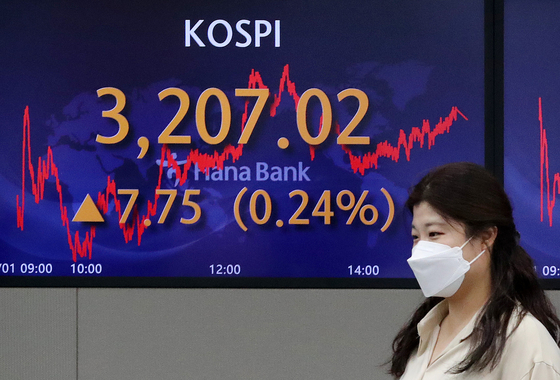 A screen in Hana Bank's trading room in central Seoul shows the Kospi closing at 3,207.02 points on Wednesday, up 7.75 points, or 0.24 percent, from the previous trading day. [NEWS1]


Stocks rose for the fourth consecutive session Wednesday as strong exports boosted investor sentiment. The won rose against the dollar.

The main index started off the session lower, tracking a muted session overnight on Wall Street, but later swung to gains on robust export data.


Korea's exports last month jumped 35 percent on-year thanks to continued global demand for chips and autos, and extended their gains for the 10th month.

Outbound shipments of semiconductors last month reached a record high for this year at $11.7 billion.

The local currency closed at 1,157.2 won against the dollar, down 2.3 won from the previous session's close.