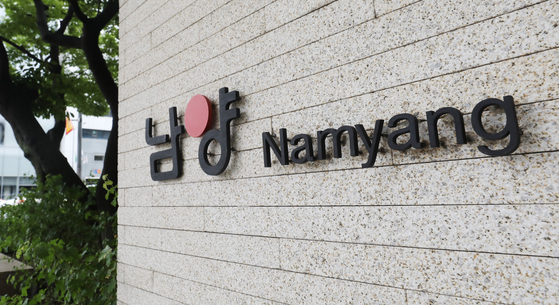 
Namyang Dairy Products Chairman Hong Won-sik has formally scrapped the takeover of the company he leads and controls, informing the buyer that the deal is off.

The move is the latest in a months-long corporate drama that got rolling with dubious claims about the medicinal benefits of a yogurt drink.

Hong, who together with related parties owns 53 percent of the dairy company’s shares, said he issued the cancellation notice after the buyer failed to maintain agreed-to confidentiality.

He said Hahn & Company, the private equity group that agreed to buy the shares, revealed confidential information about the transaction for its own gain, adding it was “an unfair deal that is only advantageous to the buyer.”

Hong said he will look for a new buyer.

Hahn & Company issued a rebuttal on the same day, saying that it did not violate any agreement of confidentiality.

It argues that Hong’s scuttling of the deal is not legally valid because the court has granted an injunction that prohibits him from selling the shares to another buyer.

Hong and the related parties signed an agreement in May to sell 53.08 percent of the food company to Hahn & Company for 310.73 billion won ($265 million).

The deal came after Namyang’s research institute claimed in April that Namyang’s Bulgaris yogurt drink could help protect people from Covid-19, unleashing a storm of accusations and setting into motion an investigation.

Hahn & Company said the parties agreed to close the deal on July 30 and that Hong in effect canceled the deal at the last minute by pushing an extraordinary shareholder meeting that was scheduled on the same day to Sept. 14.

In the Wednesday statement, Hong said he had expressed to the acquirer that more time was needed for further negotiation before closing the deal.

“I tried to negotiate with the buyer after delaying the shareholder meeting,” Hong said in the statement. “But the acquirer did not show a sincere attitude toward discussion, and instead criticized me through the press and threatened me, saying I would have to pay a huge amount of compensation for damages if I don’t complete the deal.”

Hong added that Hahn & Company is “exaggerating” the additional requests he made, which he claims were “mutually agreed” upon beforehand. He further criticized Hahn & Company for “unjustly intervening in the management of the company even before the deal closure.”

Hong said that he is still very “determined” to sell the shares and will try to find a new buyer after the legal dispute with Hahn & Company ends.

In response, the private equity group said Hong’s announcement to scrap the deal cannot be legally valid because the Seoul Central District Court granted an injunction prohibiting Hong from selling the shares to another acquirer.

Hahn & Company also filed a suit with the court on Aug. 23 to get Hong to complete a sale of the company.

“Saying the deal is unjust and is only beneficial to the buyer is an excuse not to proceed the deal,” Hahn & Company said.

The private-equity company specializes in taking controlling stakes in companies where it sees opportunities.