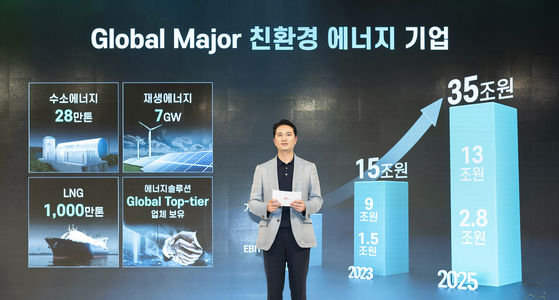 The company said Wednesday it will expand its revenues to 13 trillion won ($11.2 billion) by 2025 compared to 6 trillion won last year by developing hydrogen and other eco-friendly energy businesses.

Until now, the company had focused on LNG and the gas supplies to homes.

“SK E&S is taking on a new challenge as we can no longer disregard the serious climate change going on in the world,” Choo said.

The CEO said the company plans to increase its Ebitda [earnings before interest, tax, depreciation and amortization] to 2.8 trillion won by 2025 from 700 billion won last year.

SK E&S says it has an edge in the hydrogen business because it can utilize its LNG business infrastructure since the two businesses have similar value chains.

It said it will manufacture 30,000 tons of liquid hydrogen and 250,000 tons of blue hydrogen annually by 2025. It will also put up 100 hydrogen chargers throughout the country by that year.

Blue hydrogen is a type of hydrogen produced from fossil fuels that uses carbon capture and storage (CCS) technology to reduce the emission of carbon.

The company's mainstream LNG business will get eco-friendlier utilizing CCS technology. SK E&S said it will produce 1.3 million tons of carbon-neutral LNG from the Barossa-Caldita offshore gas field utilizing the CCS technology from 2025. The carbon-less hydrogen will be used as feedstock for producing blue hydrogen in Boryeong.