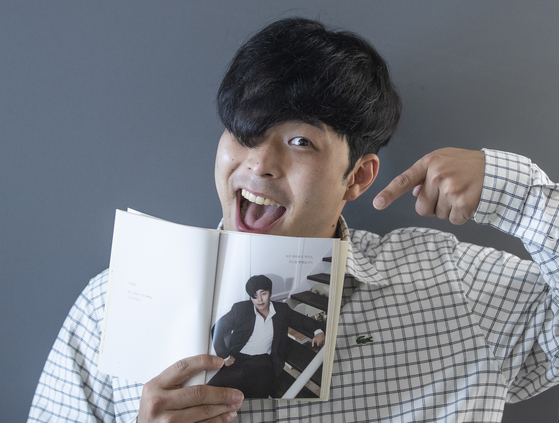 
“Joonie looks so handsome here in this picture, I think I might fall in love with his face.”

Choi Joon, a 35-year-old cafe owner, usually refers to himself in the third person as “Joonie” and speaks with a twang, which he thinks is attractive.


The JoongAng Ilbo, an affiliate of the Korea JoongAng Daily, met with Choi, who is actually a fictional alter ego of comedian Kim Hae-jun, in late August at Sandbox Studio in Yongsan District, central Seoul, to talk about his new book.

Kim spoke in the interview as Choi as he wanted to “focus on Choi’s thoughts and [twangy] voice.”

Choi recently published his first photo essay, titled “Oh? You’re Pretty Today, Too” (translated), on Aug. 27. “Pretty face, do not cry, smile,” and “If you keep looking at me like that, I can’t help but kiss you” are just a few among the many love confessions that fill the book, along with photos of Choi and illustrations.

“Everything that’s happened to Joonie already feels like a dream, yet it’s a wonderful feeling to be able to write a book too,” said Choi. 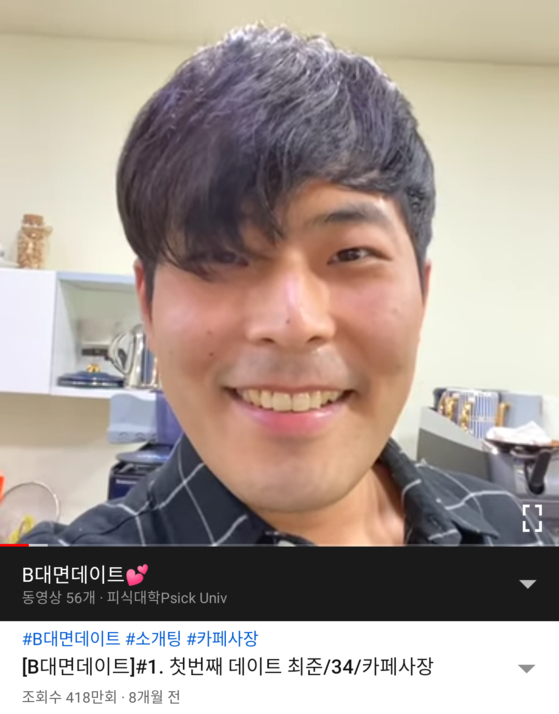 
Kim debuted in 2018 on tvN’s popular comedy show “Comedy Big League.” He created the “Cafe-owner Choi Joon” persona in 2020 on Psick University. Choi became popular through the “B-rated Online Date” (translated) YouTube series, which is designed so that viewers feel like they are on a blind date via video call. Recently, Choi has been uploading vlogs and singing with artists like 10cm, Davichi and AKMU on both YouTube and TikTok.

“Choi is also a part of Kim, and it was a character I’ve been meaning to show fans. Luckily, the character has been portrayed well through YouTube,” said Kim about Choi.

The title of Choi’s book was inspired by his first line in a “B-rated Online Date” video from last November. It starts with the image of a phone screen connecting to Choi in a video call, and he says “Hello... Oh? You’re pretty.” Choi describes himself as a “romantic,” saying “there is nothing more important in life than love,” and “no one can get in the way of it.”

Although Kim created this character to make people laugh, some say they actually find comfort in the character. “Many of Choi’s videos have lots of comments saying they were consoled by him,” said Kim So-jung, editor at local publishing company Wisdom House. “We thought it would be a good idea [for Choi] to publish an essay with words of healing and unconditional support.”

“It was completely unexpected, but I receive lots of messages from fans saying that they ‘were comforted’ and that they ‘weren’t depressed anymore’ thanks to me,” said Choi. “And it’s not just from a couple people. For the first few months [after Choi emerged as a new persona], half the messages I got on social media were about how comforting my videos were to them. I wrote this book in the hope that fans feel appreciated and loved.” 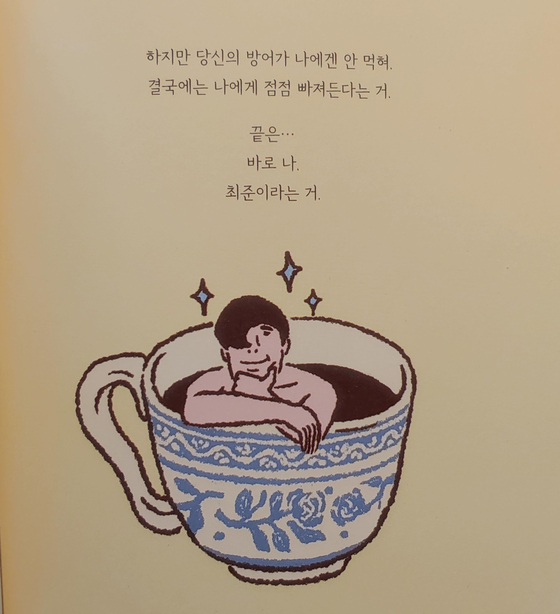 A page from Choi's book reads ″No matter how hard you try to shield yourself away from me, it won't work. Eventually you will fall for me, slowly but steadily. In the end... it'll just be me. Choi Joon.″ [WISDOM HOUSE]


Choi mentioned that one sentence from the book, “You just stay still, and learn to be loved,” is an example of warm words that aren’t said enough nowadays.

“It may be a cringeworthy thing to say but wouldn't you feel better if someone said that to you?” Choi asked.

“Joonie can’t believe Joonie is doing a photo shoot in a place like this, and everything is just simply amazing,” Choi added. “If it’s a place where Joonie can meet Joonie’s little ladies and little gentlemen [nicknames for Choi’s fans], Joonie wants to be there, spreading love and receiving love as well.”