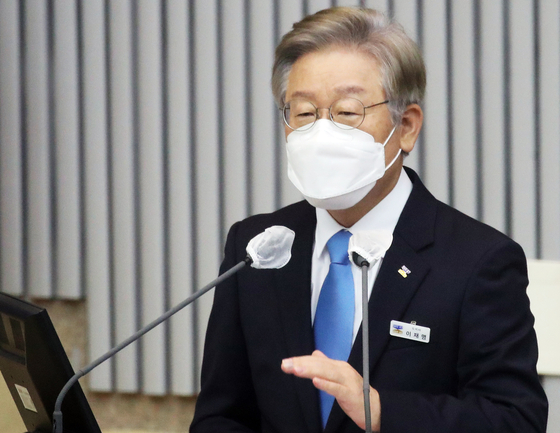 Gyeonggi Gov. Lee Jae-myung answers a question from a provincial legislator on Wednesday at the Gyeonggi Provincial Council. [YONHAP]


Gyeonggi Gov. Lee Jae-myung, the ruling party’s presidential frontrunner, is facing attacks from both in and outside his own party over an allegation that he had violated the anti-graft law by accepting a legal defense from a prominent lawyer during his trial, free of charge.

Earlier this month, the main opposition People Power Party (PPP) raised an allegation that Lee had violated the Improper Solicitation and Graft Act, often referred to as the Kim Young-ran law, by accepting a pro bono legal defense from Song Doo-hwan, the newly appointed head of the National Human Rights Commission and a former Constitutional Court justice.

According to the PPP, Song, nominated by President Moon Jae-in to head the rights watchdog earlier in August, had defended Lee for free in his 2020 Supreme Court trial.

Lee was indicted in 2018 on charges of abusing his power to confine his brother to a mental hospital in 2012 while he was serving as the mayor of Seongnam. The Supreme Court cleared Lee of the charge in 2020, and Song was one of Lee’s lawyers. Song defended Lee pro bono.

As Song was grilled at the confirmation hearing on Monday, the PPP accused both Song and Lee of violating the anti-graft law.

On Tuesday, lawyers group Lawyers for Human Rights and Unification of Korea filed a criminal petition to the Supreme Prosecutors’ Office to investigate Song and Lee for their alleged violations of the anti-graft law.

The group said Song, with his career as a former judge, is an expensive lawyer to hire, whose retainer fee was always higher than 1 million won ($850). It said Song’s free defense clearly exceeds the amount of money that Lee is allowed to receive from him in a year. Under the anti-graft low, a public official is banned from accepting any money exceeding 1 million won from the same person, regardless of any connection to his or her duties and regardless of whether the money is given as part of any quid pro quo.

Song said his free legal defense was not a bribe because he gained nothing in return, but the group said the defense he gave should be considered money, which is barred from being offered or received by public officials governed by the law.

Some ruling Democratic Party (DP) lawmakers also attacked Lee, the frontrunner in the party’s presidential primary. One of the strongest criticisms game from the campaign of former DP chairman, Lee Nak-yon.

“If Governor Lee received a free legal defense, he is suspected of violating the anti-graft law. If someone paid the fee for him, we’ve seen a similar case in which former President Lee Myung-bak was convicted,” Rep. Yoon Young-chan of Lee Nak-yon’s campaign said Sunday.

“There is a line in politics you must not cross, and that goes for a party primary in particular,” Lee wrote on his Facebook on Tuesday. “Spreading false information to disgrace a rival is one of the three major election crimes. Yoon had used me for his legislative election campaign, but now he is repeatedly slandering me. That is also immoral.”

The governor, then, demanded an official apology from Yoon. “You’ve gone too far as a person, politically and legally,” he wrote.

Members of the governor's presidential campaign said they are thinking about filing complaints to the party’s election commission, the National Election Commission and the prosecution to investigate Yoon on charges of violating the election law.

Yoon, however, demanded that Lee make public more specifics about his lawsuit and how he had paid for it. 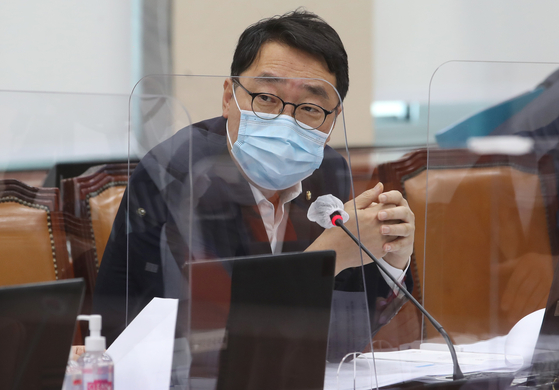 Yoon also said Song’s free defense is just the tip of an iceberg. He said two major law firms represented the governor throughout the trial, and the cost must have been enormous. But the governor’s wealth, Yoon claimed, did not go down much.

Meanwhile, the DP started the presidential primary with an online vote for its members in Daejeon and South Chungcheong on Tuesday. The one-month primary will end with an announcement in Seoul on Oct. 10. If the party is forced to hold a runoff in the case that no candidate wins a majority, the final nomination will be postponed.

As of now, six candidates including Governor Lee and Lee Nak-yon are running for the presidency. According to the Korea Society Opinion Institute’s poll on the support rate of the presidential candidates of the DP and its liberal allies, announced on Monday, Governor Lee scored 31.2 percent. Lee Nak-yon was the distant second with 17.5 percent.