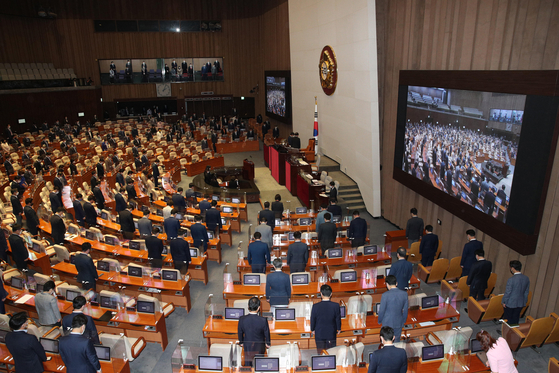 Lawmakers stand during the opening of the National Assembly's 391st regular session on Wednesday in Yeouido, southern Seoul. This is the last regular parliamentary session before President Moon Jae-in's term ends in March 2022. [NEWS1]


The United Nations Special Rapporteur on Freedom of Expression issued a stark warning to the South Korean government on the Monday over a controversial media bill, saying it could "severely restrict the rights to freedom of information and of expression in the media."

Special Rapporteur Irene Khan sent the warning in a letter last Friday through the international body’s Office of the High Commissioner for Human Rights (OHCHR) and the South Korean diplomatic mission in Geneva, according to the Foreign Ministry on Tuesday.

In her letter, Khan expressed concern over the bill’s potential to infringe on freedoms of information and expression and called for the bill to be revised to comply with international human rights conventions, to which South Korea is a party.

The rapporteur characterized the bill as imposing “vague” and arbitrary restrictions on such freedoms, saying any relevant law should be clear and made public. She further warned that the law could have a chilling effect on domestic media, resulting in self-censorship, if media outlets were subjected to the five-fold increase in penalties for releasing false or fraudulent news as proposed by the bill.

Echoing concerns of domestic media associations, Khan said that access to uncensored information and political arguments would become more important in the lead-up to the presidential election next March, which critics of the law have accused the ruling party and government of trying to influence.

The letter was delivered three days after the Transitional Justice Working Group (TJWG) and lawyer Ryu Je-hwa of the Yeomin Joint Law Offices filed a petition to the United Nations’ special rapporteur asking that the international body express its opinion over “legitimate concerns” about the bill to amend the Press Arbitration Act.

In their petition, the civic groups argued that the bill would violate the Universal Declaration of Human Rights and the International Covenant on Civil and Political Rights (Iccpr).

Meanwhile, ruling and opposition parties confirmed on Wednesday the lawmakers who will sit on an eight-member consultative body that will review the bill.

The floor leaders of the ruling Democratic Party (DP) and the main opposition People Power Party (PPP) reached an agreement Tuesday morning to form the body to narrow their differences over the bill after the PPP threatened to filibuster the DP’s attempt to railroad the law through the National Assembly.

The body will consist of four lawmakers – two each from the ruling and main opposition party – and each party will recommend two media experts.

All of the lawmakers have backgrounds working in the media or dealing with media issues in their parliamentary career.

Kim Jong-min was previously a journalist and worked as a Blue House spokesman during the administration of President Roh Moo-hyun. Former lawyer Kim Yong-min is a member of the DP’s supreme council and spearheaded the party’s push to pass the media bill as chair of the DP’s media reform committee.

PPP lawmaker Choi Hyung-du is also a former journalist and a member of the National Assembly’s Culture, Sports and Tourism Committee, where he argued strongly against the bill.

Jun is a member of the Legislation and Judiciary Committee, which acts as a gatekeeper of legislation to be submitted for a full vote by the legislature. The committee approved the bill for a parliamentary vote in the early hours of Aug. 25, after PPP members walked out in protest.