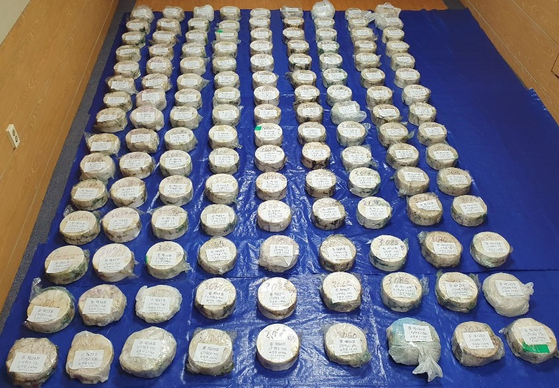 The 404.23 kilograms (891.2 pounds) of methamphetamine smuggled into Korea from Mexico, seized recently by the prosecutors in Busan [BUSAN DISTRICT PROSECUTORS' OFFICE]

This is the largest amount of methamphetamine, or meth, ever confiscated in a police or prosecution investigation in Korea, the Busan District Prosecutors’ Office said Wednesday.

According to the prosecution in Busan, the investigation in Korea began after a portion of the meth smuggled into Korea was sent to Australia and was caught by the local authorities in May.

The arrested 34-year-old Korean man worked with another man, a Korean with Australian citizenship, to smuggle the hundreds of kilograms of meth from Mexico across Korea's border in two different attempts — one in December 2019 and another in July 2020.

The two men smuggled in the meth by hiding them inside helical gears, a circular-shaped machine part often used in aircrafts.

The prosecutors confiscated 404.23 kilograms of meth, but they suspect that there was at least 500 kilograms more.

“From the beginning of the investigation, we cooperated with the customs authorities in Busan, the National Intelligence Service [NIS] and international agencies, and together we were able to catch the man with the 404.23 kilograms of methamphetamine,” said a prosecutor of the Busan District Prosecutors’ Office. “But another 500 kilograms of methamphetamine that were smuggled into Korea from Mexico have already been smuggled into Australia.

"The two men smuggled drugs into Korea because they thought that smuggling meth from Korea to Australia would be less likely to be caught than smuggling methamphetamine directly from Mexico to Australia,” the prosecutor continued. “We will crack down on the smuggling of narcotics through cooperation with relevant agencies such as the NIS and the national tax authorities.”

The prosecution in Busan is trailing the Korean-Australian man, with an arrest warrant already issued.