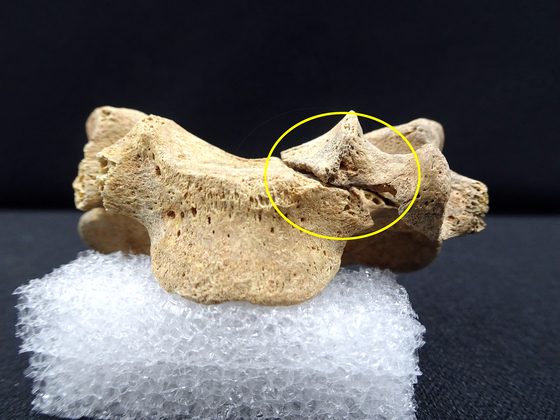 The remains of Korea’s first three Catholic martyrs — Paul Yun Ji-chung, James Kwon Sang-yeon and Francis Yun Ji-heon — were recovered in Wanju, North Jeolla, in March, some two centuries after their deaths, and shown to the media by the Diocese of Jeonju Wednesday. Pictured is the neck bone of Paul Yun Ji-chung, who was beheaded in 1791. The diocese said the remains showed cuts made by a sharp object around his neck. Kwon was also beheaded that year and Yun’s younger brother, Francis Yun Ji-heon, was quartered in 1801. The remains were confirmed to belong to the martyrs following historical research and DNA testing. The diocese said it plans to hold a Mass and an enshrinement ceremony in honor of the three martyrs on Sept. 16, near the site where their remains were found. [YONHAP]