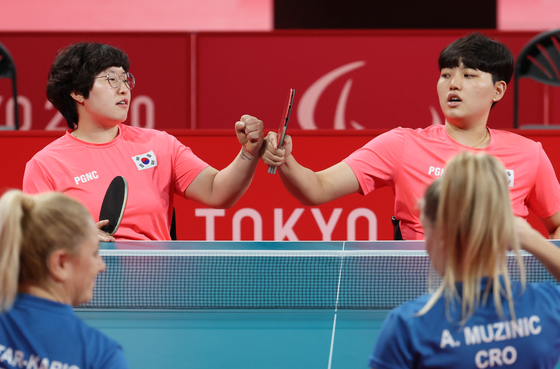 Lee Mi-gyu, left and Yoon Ji-yu celebrate defeating Croatia in the women’s team class one to three semifinals in two straight matches at the Tokyo Metropolitan Gymnasium in Tokyo on Wednesday. [YONHAP]


Korea's table tennis squad is guaranteed another three medals at the 2020 Tokyo Paralympics, as three separate teams won their semifinal matches on Wednesday to advance to their respective finals.

Kim Young-gun and Kim Jung-gil got things started, defeating France in the men's team sport class four and five. The duo won their doubles and individual matches for a comfortable victory.

Yoon Ji-yu and Lee Mi-gyu were up next, defeating Croatia in the women's team class one to three semifinals in two straight matches.

Later in the evening, Park Jin-cheol and Cha Soo-yong beat Poland in the men's class one and two match. Korea took the doubles match but narrowly dropped the first individual match. A win in the third match earned Korea a ticket to the gold medal game.

There are 11 classes in Paralympic table tennis: Athletes in classes one to five compete in wheelchairs, while those in classes six to ten do so standing. Korea has so far won 10 table tennis medals in Tokyo.