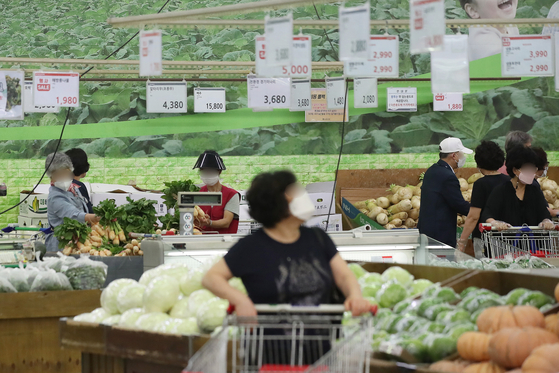 Shoppers at a grocery store in Seoul on Thursday. According to Statistics Korea, consumer price rose 2.6 percent in August compared to a year ago. Consumer price has been aboe 2 percent for five consecutive months since April. There are also concerns that the government emergency relief grant that will be handed out starting Sept. 6 will further add to inflation. [YONHAP]

Consumer prices rose 2.6 percent in August compared to the same period a year ago, according to Statistics Korea on Thursday.

That was the same rate as in July, which was the steepest increase so far this year.

August was the fifth consecutive month in which consumer prices rose more than 2 percent.

This is the first year in four years in which consumer prices have risen more than 2 percent for five consecutive months. The last time was between January and May 2017.

The news contradicts an earlier argument by the government that price increases would level off in the second half.

The government blamed the base effect for rapid increases in past months, meaning that weak prices a year ago due to Covid-19 made current price increases artificially high. It said consumer price growth would slow down in the second half and when international crude prices stabilized.

Emergency relief grants of 250,000 won being handed out to most Koreans are expected to add to inflation pressure. 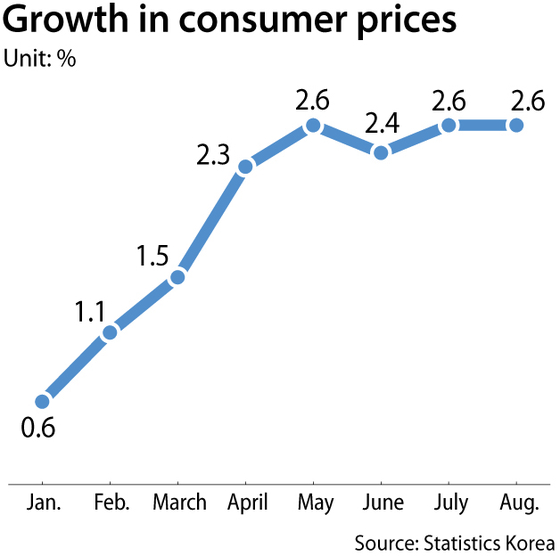 Egg prices skyrocketed 54.6 percent. They have been seeing double-digit increases for eight consecutive months despite the government's importing of eggs.

Watermelons went up 38 percent while the price of spinach rose 35.5 percent.

Processed goods prices went up 3.2 percent.
Petroleum prices surged 21.6 percent year-on-year. Petroleum prices have been growing since May, when they grew at the fastest rate since August 2008.

Individual services increased 2.7 percent compared to the same month a year ago.

As consumer prices continue to rise above 2 percent, the chances of the central bank hiking interest rates are growing.

The Bank of Korea (BOK) last week tightened its monetary policy by raising the key interest rate for the first time in 15 months amid concerns over inflation pressure and expanding household debt.

BOK Gov. Lee Ju-yeol hinted that the hike might not be the last for this year.

“We have raised the rates by 25 basis points, but the rate is still accommodative,” Lee said. “The central bank plans to gradually adjust the degree of accommodation in our policies, which have been much expanded in the past.”

On Monday, the central bank released a report stressing the increasing inflationary pressure.

It noted that consumer prices have been rising more than 2 percent every month since April, which exceeds the BOK’s target of keeping consumer price growth at 2 percent.

Last week, the BOK raised its projection for this year’s consumer price growth from 1.8 percent to 2.1 percent.

The central bank’s report noted that even when excluding volatile energy and grocery prices, there is growing inflation pressure and this trend is likely to continue until next year.

Some analysts are projecting another rate hike in November.

The monetary policy committee has two more meetings for this year: in October and November.

“It is likely that the BOK will monitor the effect of the interest rate hike and push for another hike during the meeting in November once 4-percent [economic] growth is confirmed,” said Heo Jeong-in, an analysts at KTB Investment & Securities. “But there is also the possibility that the rate will be raised in October if vaccine distribution improves and consumer sentiment is not hurt significantly.”