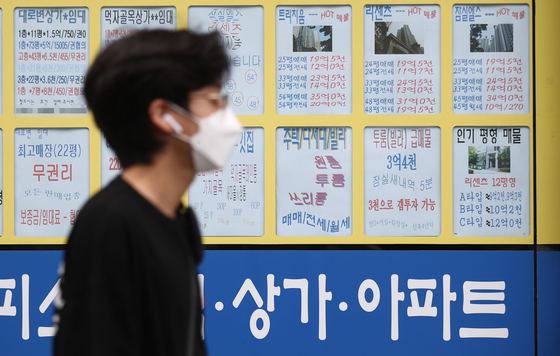 A real estate agency in Songpa, Seoul. The government announce it will be lowering the real estate brokerage commission. [YONHAP]

Real estate brokerage commissions are set to drop dramatically in October, some by about half, as new caps are put into place.

Before the change, all apartments above 600 million attracted a rate of 0.9 percent.

The rate for housing units below 600 million won will remain the same.

For those sold between 200 and 600 million won, the realtor is allowed to charge as much as 0.4 percent.

The broker will be taking home a maximum 2.4 million won on a 600-million-won contract, which is half of the 4.8 million won that the real estate agent could pocket under the current rates.

Fees on contracts below 300 million won will remain unchanged.

For monthly rentals, the base used is 100 times the rent plus the deposit.

“The commissions on real estate transactions are an issue that directly influences the lives of the average people,” said Han Jung-hee, a director at the Land Ministry. “Once the changes are implemented next month, we expect the burden that people feel from real estate brokerage to subside.”

Some of the clients started to complain about commission charges by the real estate agents while raising questions about the actual contribution that the agents have made during the transaction process.

Last month, 408,492 people applied for the real estate brokerage license exam. That is the largest number of applicants since the exam started in 1983.

The number is believed to have spiked after it was reported that real estate agents successfully selling even just couple of high-end apartments could make as much as the annual salary of an employee working for a large corporation.

The Korea Association of Realtors pointed out the commission rate in Korea is already low compared to countries like Japan, where it is 3 percent, and the United States, where it is about 4 to 6 percent.

Property restrictions lifted in most Seoul districts as prices fall