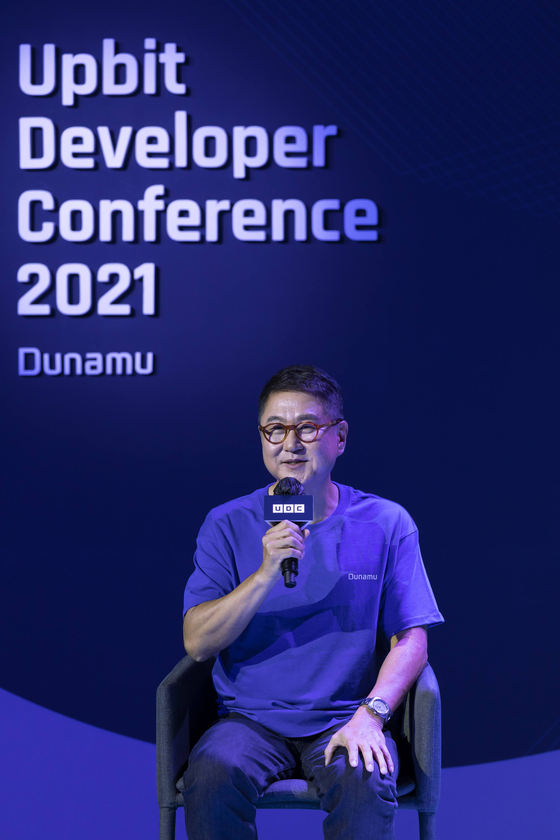 Lee Sirgoo, CEO of Dunamu, said he expects complex blockchain technologies to increasingly affect people’s daily lives as many services and businesses are developed using the technology, while closing the two-day Upbit Developer Conference on Thursday

“When internet was first introduced to the world, people did not fully understand the technology, but it received an explosive response as there were useful services related to daily lives,” Lee said during closing remarks at the conference. “As for artificial intelligence, it needed momentum, like the AlphaGo, for the technology to receive more attention from the public.”

Lee said that as blockchain technology is adopted in various businesses, people will start to realize the usefulness of it, though the technology itself seems complex and is evolving very fast.

Lee pointed to the rapid growth of NFTs to be an interesting trend to look out for. This year, the conference dedicated the first of its two days to NFTs with four separate sessions.

“I think NFT is really a hot keyword, though it’s not an easy concept,” Lee said. “It has infinite potential to be adopted by various businesses, including arts, sports, games and entertainment.”

An NFT is a blockchain-based proof of digital asset ownership that can't be replaced with something else.

Cuy Sheffield, vice president and head of crypto at Visa, who opened the second day of the conference, also shared his views on the importance of NFTs.

“We are spending a lot of time working with the payment ecosystem trying to make it easier for consumers to purchase crypto or NFTs using a Visa credential, using a Visa card,” Sheffield said. “We think that is going to be really important for NFTs to go mainstream.”

Sheffield expected there will be a bigger future for NFTs and that there will be more opportunities for companies with credibility like Visa.

“We envision a world where purchasing an NFT is just as easy as purchasing anything else on an e-commerce platform using a Visa card that can be stored on file, and the NFT is delivered into your crypto wallet,” he said. “I think there are a lot of opportunities for Visa to help.”

“With Visa in the lead, other payment companies are showing interest in digital assets,” Lee said. “While we have only seen in movies digital assets being used as payment on a day-to-day basis, I think that becoming a reality is not too far away.”

On the first day of the conference, multiple speakers touched on how NFTs have helped game developers like Sky Mavis and The Sandbox build digital economies on metaverses and how the technology has been popularizing the art market.

“We expect to see more surprises related to the blockchain technology at the upcoming conference in 2022,” Lee said.

The conference, hosted by Dunamu, which operates Upbit, marks its fourth year this year. This year, it has attracted 8,000 registrations, double last year’s figure.