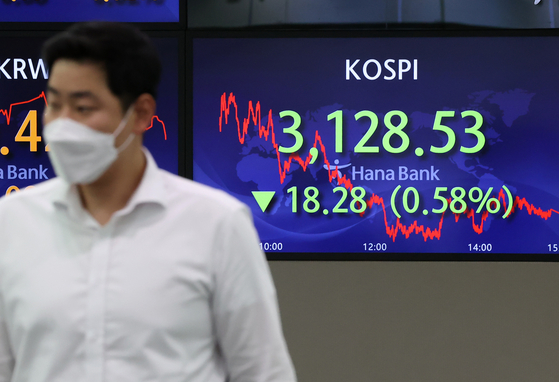 A screen in Hana Bank's trading room in central Seoul shows the Kospi closing at 3,175.85 points on Thursday, down 31.17 points, or 0.97 percent, from the previous trading day. [YONHAP]


Stocks ended a four-session winning streak Thursday as investors locked in gains amid concerns of inflation. The won fell against the dollar.

Trading got off to a lackluster start, following a mixed session on Wall Street, as investors attempted to cash in gains.

Shares in the online lender dropped on reports that the Korea Post offloaded the majority of its stake a day earlier in after-hours trading.

The local currency closed at 1,161.5 won against the dollar, up 4.3 won from the previous session's close.