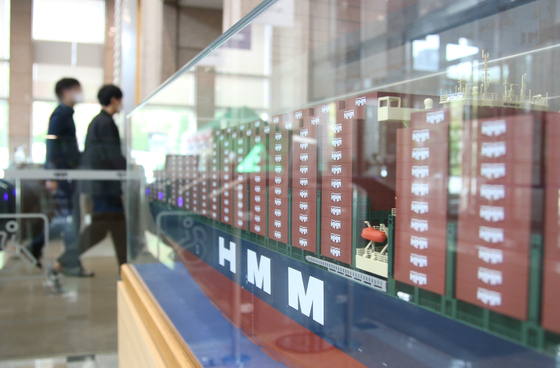 The lobby of HMM’s headquarters in central Seoul on Thursday. [NEWS1]


HMM's two labor unions agreed on a wage agreement after more than two months of wrangling and threats of strikes.

The largest shipping company in Korea announced Thursday that labor and management agreed on a 7.9 percent wage increase for this year and a 2.7 percent increase in welfare benefits, along with a bonus equivalent to 650 percent of a month's salary.

The agreement was signed at 8 a.m. on Thursday after 77 days of negotiations.

The wage increase was 0.1 percentage point less that management's initial proposal of eight percent. The bonus was raised 30 percent.

The unions asked for a 25 percent increase in wages and a bonus equivalent to 1,200 percent of a monthly salary.

They argued that a 25 percent raise was necessary after wages were frozen from 2012 through 2019 and because earnings of the company have improved.

Both unions – representing employees on ships and those on land – voted to strike before the agreement, with the sea crews threatening to resign en masse and go to work for Mediterranean Shipping Company, HMM’s bigger rival based in Geneva.

“We are sorry for causing concerns about a possibility of transportation disruption,” said HMM in a statement on Thursday. “Labor and management could agree [on the wages] by each backing down a step, considering difficult [economic] situations [caused by] Covid-19 and the impact of marine transportation on a country’s economy.”

“Though the agreed wage increase is not as high as union members had expected, we could not continue seeing the growing concerns over a transportation disruption,” said a spokesperson for the union representing workers on land.

A spokesperson for the other union said, “We hope the public knows the hard work done by crewmen.”