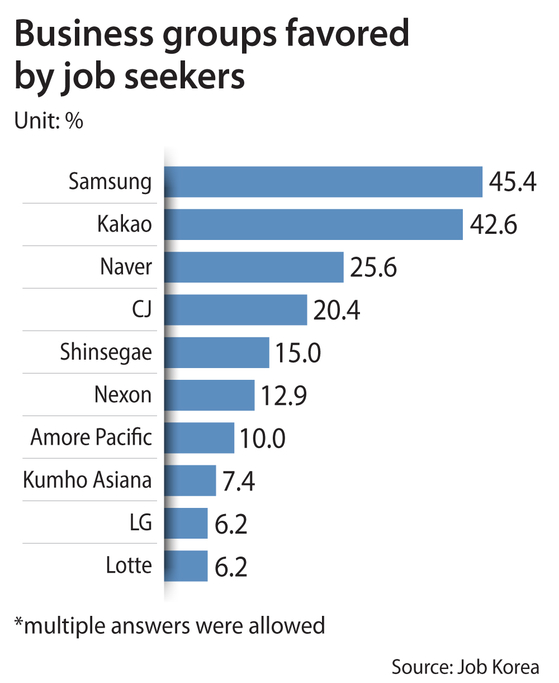 IT and tech companies such as Naver and Kakao are attracting job seekers, and companies that used to be favored are being advised to change corporate culture to win back the best and the brightest.

“My parents want me to work at Samsung, but I want to go to Naver or Kakao,” said a 26-year-old Korea University student who majored in business. “I want to build my career in an environment where performance is valued over age or how many years of experience people have.”

Companies such as Naver, Kakao, Line, Coupang and Woowa Brothers have recently been gaining popularity due to the pandemic putting an emphasis on digitization and online businesses. With business flourishing, the companies are offering higher pay and have been able to establish high profiles. Job applicants are even grouping them together as the top five technology companies, much like the top five in the United States.

According to a Job Korea survey of 700 university students, 45.4 percent said they want to get a job at Samsung companies, 42.6 percent at Kakao and 25.6 percent at Naver. Multiple answers were allowed.

The top reason why applicants chose those companies was because they had worker-friendly policies and improved working conditions, with 68.9 percent saying so. Another 44.4 percent noted the high salaries as the reason, and 30.8 percent made their choices because the companies were known to give more autonomy to the employees.

“Samsung used to be No. 1 by a huge margin some 10 years ago, with financial companies and public firms taking the top spots,” said Byun Ji-seong, a manager at Job Korea. “The rank of preferred companies has changed a lot, largely because of the company’s future possibilities, and corporate culture is most important today.”

According to Byun, job seekers were found to value worker-friendly policies more than salaries because people in their 20s are less interested in getting a promotion compared to the older employees. They tend to dislike hierarchical corporate culture and want work-life balance.

“The employees were just part of a big corporate system at my last job, and the company did fine with or without personnel and people worked like they had civil service jobs,” said an employee who recently made a career move to one of the five tech companies. “I felt like I was just a part in a big machine.”

“Getting a promotion was the only compensation, and I felt skeptical about it because even the promotions were done in order of years of experience rather than individual performance.”

Despite the recent rise in popularity, some say the big name tech firms aren’t as ideal as they sound.

“Most of the employees here are experienced hires, and we receive vastly different paychecks because people are paid based on the pay of the previous company,” said an employee of an IT company.

Job seekers nonetheless view the tech firms as their dream companies, and conglomerates are trying to reclaim their past popularity. IT-related fields, such as artificial intelligence, are expected to be core future business areas, and losing personnel would weaken competitiveness.

“Big companies that were established in the 1960s and 70s have corporate cultures synonymous with the past, and the problem is that it’s very hard to change the existing system,” said Shin. “Changing it gradually step by step only extends the period in which the old and new have to coexist, and inevitably goes back to the old system.”