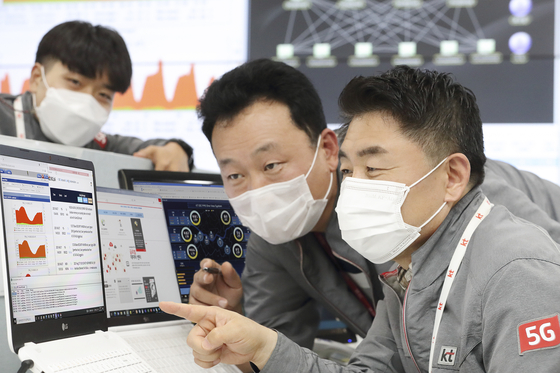 Staffers at KT check the company's One IDC network on Thursday at the Yongsan IDC in central Seoul. [KT]


KT has increased its internet network capacity by 10 times, with network expansions in six internet data centers (IDCs) in the Greater Seoul region.

Companies should be able to deal better with sudden increases in user traffic on their websites, KT said Thursday.

According to KT, the six IDCs were connected to its “One IDC” network in late August. The process began in 2019 and was recently finished.

One IDC is a single-line internet network that connects all the IDCs located in the Greater Seoul region, including Seoul and Gyeonggi.

KT is the first telecom company in Korea to connect separate IDCs to create a single-line IDC.

Companies that use KT for the internet in those six areas can now sign up for an extended network of up to one terabit.

With One IDC, an IDC can process a sudden increase in internet traffic without a glitch, by “borrowing” leftover capacity from other IDCs.

One IDC allows data dispersed across different IDCs to be integrated easily. It also reacts faster to a distributed denial-of-service (DDoS) attack, which induces a sudden traffic jam in a network.

“We have expanded our network and implemented new technology after seeing that companies no longer demanded gigabit internet, but terabit internet,” said Lee Mi-hee, senior vice president of KT's Cloud/DX Business Unit. “KT will keep innovating as the top IDC operator in Korea.”