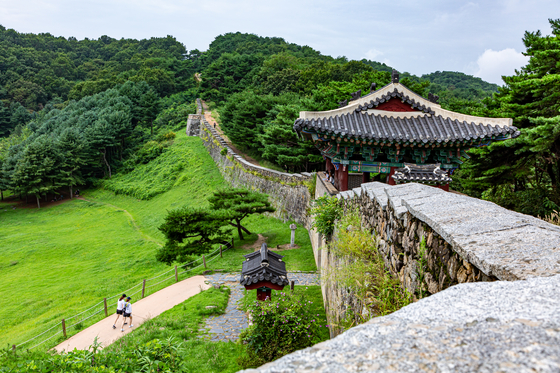 Sangdang Fortress is one of the most popular travel destinations in Cheongju, North Chungcheong. Right outside the fortress is a large lawn where locals come to play badminton or walk their dogs. It is possible to walk on top of the fortress, which is about four kilometers (2.4 miles) long. It takes about one hour and a half to walk the entire fortress. [LIETTO]


CHEONGJU, North Chungcheong — Compared to other cities like Busan, Jeonju and Sokcho, Cheongju is not as popular among travelers due to its lack of prominent places to visit. However, thanks to its proximity to the Seoul metropolitan area and the nature it has to offer, the state-run tourism institute is now on the move to more systemically promote the city with “potential.”

One of the first places many locals and those who have been to Cheongju recommend is Sangdang Fortress. From the central area of the city, it takes only about 10 minutes by car to get there.

It is originally built in Baekje Dytnasty (18 B.C. to 688 A.D.) as an earthen fortification. After invasions in the Joseon Dynasty (1392-1910) from Japan and China, the country decided to use rocks to make the fortress much sturdier in 1716. However, after the reinforcement efforts, the fortress never really faced any further major battles. Because of this reason, the spot is less enticing to history buffs, despite the great condition it is in. 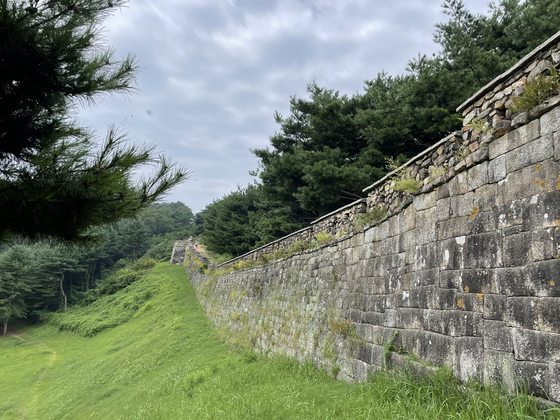 The stone wall of Sandang Fortress in Cheongju [LEE SUN-MIN]

The entire fortress is about four kilometers (2.4 miles) long. Near the entrance, outside of the fortress, is a large grass lawn, where many locals go to enjoy picnics. It is easy to spot families walking their dogs around or playing badminton, instead of heading for a slightly uphill walk on top of the fortress.

If you're after a better view of building-packed central Cheongju from afar, keep on walking on the trail along the top of the fortress. If you'd prefer to be protected from the sun, there is another walking trail that features trees to offer some shade. The full trail takes about one hour and 30 minutes to complete.

Right by the fortress, there is a number of restaurants where most people go for lunch after walking the trail. Most places sell similar dishes, such as marinated acorn jelly and a variety of banchan, small dishes that accompany a bowl of rice. 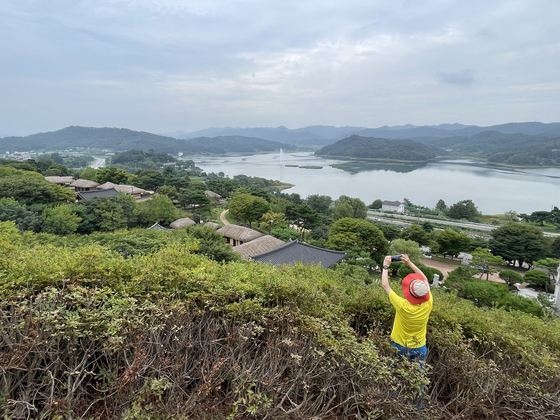 A visitor to Munui Cultural Heritage Complex, also known as Munui Cultural Properties Site, takes a photo of the manmade village that features hanok with hay-thatched or giwa tiled rooves. It is also possible to view the Daecheong Reservoir, which was made with the establishment of the Daecheong Dam. Many of the houses where moved to this location because of fears that they would be flooded by the dam. [LEE SUN-MIN]

Munui Cultural Heritage Complex, also known as Munui Cultural Properties Site, is one of the spots the Korea Tourism Organization has chosen to foster and promote more in the coming years so that it can later become a destination even for international travelers. There are a total 35 places across the country that have been selected for having such potential.

Some of the hanok, or traditional Korean homes, in the cultural complex have been moved there from neighboring areas in Cheongju, as they were in danger of being flooded by the Daecheong Dam, which was established in 1980. Besides hanok where Joseon era aristocrats used to live, the cultural complex also has some of the dolmens rescued from the area that is now underwater.

It is located on top of Mount Yangseong, neighboring the newly-built Daecheong Reservoir. The hanok there have thatched roofs or roofs made with giwa, or tiles. Given that the area generally had a moderate temperature except during winter, the main entrances to the houses are usually placed in the eyeline of where residents would sit so that they could take in everything that nature has to offer from the comfort of their own homes. 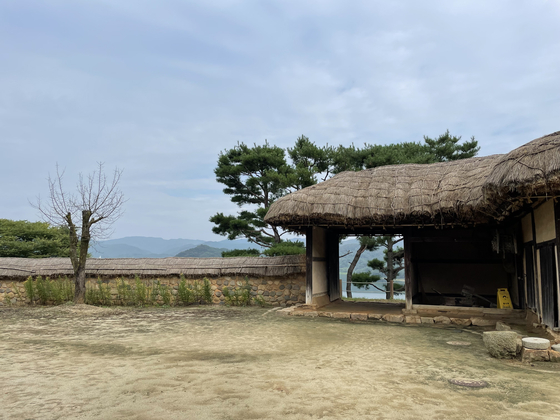 Many homes were built to showcase the nature and temperate climate of the area. Homes were designed so that residents could view the outside from where they were sitting inside their homes. [LEE SUN-MIN]


A jumak, or bar and restaurant usually located in the entrance of each neighborhood, is also located inside the complex, although it doesn’t function as a bar now. It also has a building called Munsangwan, used to bow toward the north where the king was in the past. The building was where overnight officials coming from where the king was would stay.

While the history books have no special records about this area, it still makes for a lovely stroll and you can easily picture what it would have been like centuries ago with people walking around or riding horses, dressed in hanbok. Since it is located on top of the mountain, the view of the reservoir and other hills is well worth the hike.

It is now a garden that is home to about 100 different trees and 130 different types of flowers. The area measures 1.8 square meters (19.3 square feet) large and many wild animals have also built their homes there. It has a large pond covered with lotus leaves, as well as a metasequoia tree forest with seats on the ground. It also has a paved trail to a pavilion set up by the reservoir.

The building which temporarily housed previous presidents is still set up with the furniture of the time. Visitors are not allowed to enter the rooms but can view them from the corridor outside. There is also a framed piece of paper on display that has the signatures of previous presidents and kings from the Joseon Dynasty.

In another building commemorating the works of past presidents of Korea, paintings that show what they have achieved are hung on the wall. Statues of presidents are also scattered around the garden. 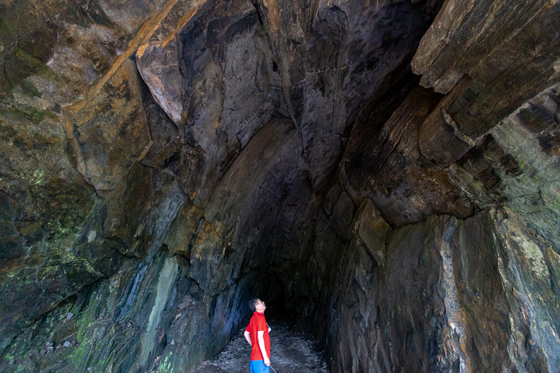 Cheongseok Cave or Cheongseokgul is where artifacts from the Old Stone Age were found in Cheongju. It is a popular destination among visitors, especially in the summer as it offers some welcome relief from the heat. [LIETTO]

If you're more interested in nature, head to Cheongseok Cave, also known as Cheongseokgul which is home to some of artifacts estimated to have come from the Old Stone Age. The cave isn’t too deep and is the perfect place to cool off in the summer heat.

Getting to Cheongju takes less than two hours from Seoul City Hall in central Seoul by car. It is also easy to get to the city from neighboring Osong, through which the express KTX train runs, if you plan on renting a car there or use public transportation. Or you can choose to get on an express bus from the Express Bus Terminal in southern Seoul which will take you to Cheongju Bus Terminal. For more information about how to navigate within Korea, call the travel hotline at 1330.