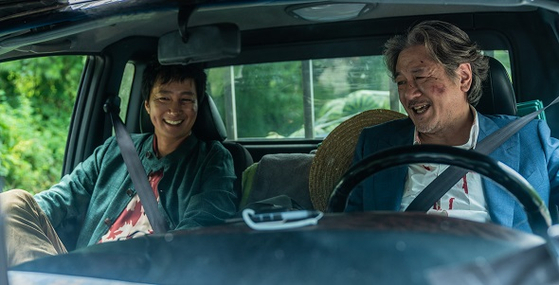 A scene from director Im Sang-soo's film ″Heaven: To the Land of Happiness” [BIFF]


Director Im Sang-soo’s “Heaven: To the Land of Happiness” will open the 26th Busan International Film Festival (BIFF). It will be the film’s world premiere.

The film, along with director Yeon Sang-ho’s “Peninsula” (2020), were official selections for the 73rd Cannes Film Festival last year, which was canceled due to the Covid-19 pandemic.

“Heaven” is Im’s first film since “Intimate Enemies” in 2015. The road movie revolves around a prisoner known only by his number, 203, played by actor Choi Min-sik). He escapes from prison and joined by Nam-sik (played by actor Park Hae-il) on his journey to a new life.

It was reported earlier in the local media that Youn Yuh-jung, who won a Best Supporting Actress Oscar this year for “Minari,” is to make a special appearance in the film.

“Im’s exceptional directing and the two actors’ eloquent performances are harmonized in this film to ask the audience the beautiful question: What is happiness,” the festival said in a statement.

Between happiness and constraints