Time to step up the art and culture game, says Indian envoy

Time to step up the art and culture game, says Indian envoy 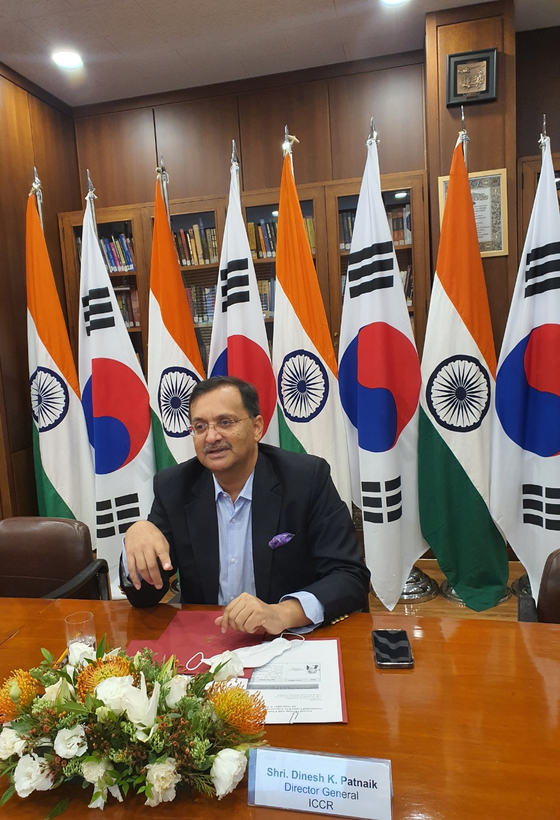 Director-General Dinesh K. Patnaik of the Indian Council for Cultural Relations speaks with the Korea JoongAng Daily at the Embassy of India in Seoul on Thursday. [EMBASSY OF INDIA IN KOREA]


The pandemic did not stop people from looking for more art and culture in their lives — be it through online yoga classes or international movie festivals — but it’s time for countries to do more to bring the art exchanges back up to its original, pre-Covid levels, said Director-General Dinesh K. Patnaik of the Indian Council for Cultural Relations (ICCR), during his visit to Korea on Thursday.

“Everybody who stays at home today is doing more culture than before — they’re reading books, watching movies, seeing paintings, art, cooking,” said Patnaik, speaking to the Korea JoongAng Daily at the Indian Embassy in Seoul on Thursday. “Korean movies have become very popular because of the pandemic, because people are sitting at home and watching OTT [over-the-top media services], and everybody realized you can do yoga easily at home.”

While the boom in virtual consumption of culture across borders is encouraging, Patnaik added that the producers and artists surviving on virtual platforms tended to be of big corporations.

“It’s important that young budding artists are encouraged, because they are the ones where innovation, experimentation, new rhythms, beats and art forms come from,” Patnaik said. "We try to step in to help exchanges of arts where support is needed. Exchanges during the pandemic is difficult, but culture takes a lot of planning, and we need to start where we can."

The ICCR, a government body in India established in 1950 to promote cultural exchanges between India and other countries, has made regular visits to Korea since 2011, when the Embassy of India in Korea established the Swami Vivekananda Cultural Center. The council presented a bust of Mahatma Gandhi in 2014, which was placed at Hongbeop Temple in Busan, just six months after former President Park Geun-hye visited India.

The ICCR also helped bring a Buddha statue to Tongdo Temple in Yangsan, South Gyeongsang, in May, despite the ongoing pandemic. The temple has ties with India dating back to its foundation — it is said to have been founded by monks who had traveled to India and became part of the Buddha’s close circle of disciples.

Based off of another historic tie between the two nations in regards to Buddhism, namely, the story of an Indian princess who was wed to a Korean king in the early ancient dynasties, the ICCR has been working closely with artists in India to produce a musical on the legend.

“We are working together with our Korean counterparts and artists in India to produce a musical on Princess Heo in India,” Patnaik said.

Legend has it that Princess Suriratna, known as Heo Hwang-ok in Korea, traveled to Korea some 2,000 years ago and married King Kim Suro, the legendary founder of the Gaya confederacy during Korea's Three Kingdoms Period (57 B.C. to A.D. 668).

First Lady Kim Jung-sook in her state visit to India in 2018 dropped by the ancient city of Ayodhya, where the princess is believed to have come from.

“It’s going to be a huge production, and we hope to see it realized on stage soon, after we have less of the Covid-19 concerns of today,” said Patnaik.

India’s daily cases of infections peaked at more than 414,000 daily cases in early May in a wave spurred by the Delta variant of the Covid-19 virus. Daily cases dropped to around 40,000 a day in recent weeks.

The director-general added that while it’s unclear when regular travel will be possible again throughout the world, he hopes to see a light at the end of the tunnel near the end of this year, as more countries are hoping to reach herd immunity by then.

“We are hoping that by the end of the year, we would have vaccinated more than 50 percent of the population, which would mean herd immunity for India when combining the vaccinated people with those who have recovered from infections,” said Patnaik.

Having represented the Indian government for over 30 years in Geneva, Dhaka, Beijing, Vienna and others, Director-General Patnaik said he has also seen Korea change over the decades as he had occasions to stop by Seoul once every few years. This is his fourth visit to the country. His first was in the late 1990s.

“It was a different Korea at the time: The buildings weren’t so tall, and you had a lot more smaller shops around the corners,” Patnaik said. “Korea has grown into a very strong and democratic country over the years, and every time I come back, I am excited to see how the younger generations are leading changes in the country.”

But some things — good things — have stayed the same, Patnaik said.

“One similarity across our cultures that doesn’t seem to change with time is our respect for the elderly and our family values,” he said. “We are both family-centered people, with high levels of respect for the aged.”

Flying into Korea on Monday, Patnaik met with the monks of Tongdo Temple, the Gimhae municipal council (Gimhae is where most of the relics from the Gaya confederacy are based in Korea) and with several counterparts in the educational and tourism sectors, before concluding his trip on Friday.

“It’s been encouraging to see how the cultural center has been providing a number of arts and culture programs to the people in Korea over the pandemic,” said the director-general. “In India we believe the world is one family, and one of the things you do with your family is you share whatever you have. We hope to do that more with our friends in Korea.” 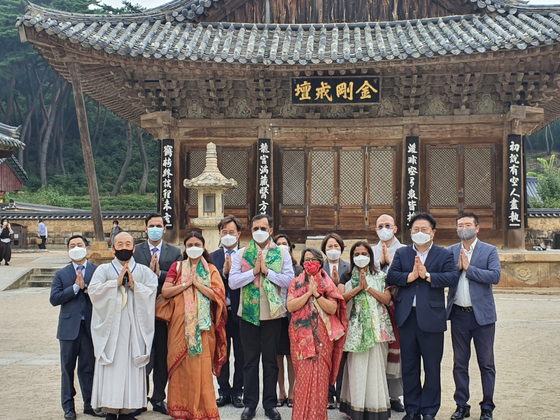 In the front row, Riva Ganguly Das, secretary at the Ministry of External Affairs of India, fourth from right; Director General Dinesh K. Patnaik of the Indian Council of Cultural Relations, fifth from right; and Sripriya Ranganathan, ambassador of India to Korea, third from right, pose during their meeting at Tongdo Temple in South Gyeongsang on Tuesday. [EMBASSY OF INDIA IN KOREA]