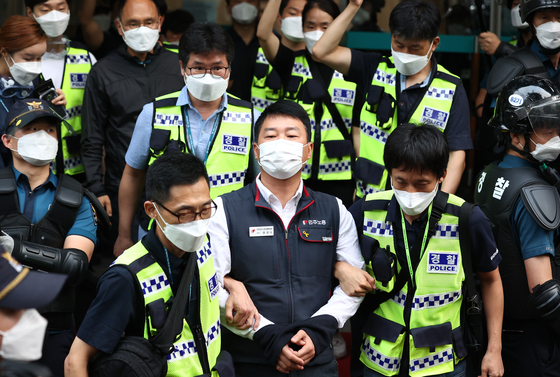 
The police on Thursday raided the office of the country’s militant umbrella union, the Korean Confederation of Trade Unions (KCTU), and arrested its leader Yang Kyeung-soo on charges of having organized massive illegal rallies in Seoul.

A team from the Seoul Metropolitan Police Agency exercised an outstanding detention warrant against Yang, issued by the Seoul Central District Court on Aug. 13, early Thursday morning. Yang was suspected of having organized a series of rallies in Seoul in violation of the government’s social distancing measures to help prevent the spread of Covid-19 from May till July.

The police entered the KCTU office in Jung District, central Seoul, around 5:28 a.m. and left the building with Yang around 6:29 a.m. Yang is currently being held in a detention cell at Jongno Police Station.

One of the major rallies Yang had organized was held on July 3, and the KCTU said about 8,000 people attended the event in downtown Seoul.

Yang has refused to attend his warrant hearing for weeks, and the court reviewed his case and issued the detention warrant on Aug. 13 with both Yang and his lawyer in absentia.

Yang refused to cooperate with the Jongno Police Station’s summons on three separate occasions in July. He finally attended a questioning on Aug. 4, and the interrogation lasted for about five hours and 30 minutes. The police questioned another 22 suspects in addition to Yang, who were suspected of violating the laws governing demonstrations and infectious disease prevention.

After the police arrested Yang, the KCTU declared war against the Moon Jae-in administration. The labor union was one of the strongest patrons of Moon in the past years.

“We will repay this arrest with a powerful general strike,” the KCTU said in a statement. “The forcible arrest of Yang will fuel the workers’ rage.”

The KCTU also warned Moon that no president was able to end their presidency successfully when they angered the laborers.

While the KCTU is planning a general strike for Oct. 20, speculation is growing that it will likely lose momentum because union members are no longer as supportive of illegal strikes.

On Thursday, the Korean Health & Medical Workers' Union called off its planned strike, just hours before the unionized workers were set to go on a nationwide walkout amid the pandemic. The union representing over 56,000 nurses, pharmacists and other health care workers struck an agreement with the government during last-minute talks.

Over the past years, the KCTU’s general strikes increasingly lost enthusiasm from its members. Only about 1 percent of the unionized workers have participated in the general strikes in recent years, and the upcoming walkout is expected to be attended by only union leaders.

It still remains to be seen whether subway workers will stage the strike they have planned for Sept. 14. Subway workers’ unions in Seoul, Incheon, Busan, Daegu and Daejeon have voted to hold strikes if their negotiations with the central and local governments fail. They are demanding higher wages and the retraction of layoff plans.

If the subway workers go on strike, it will be the first since 2016.