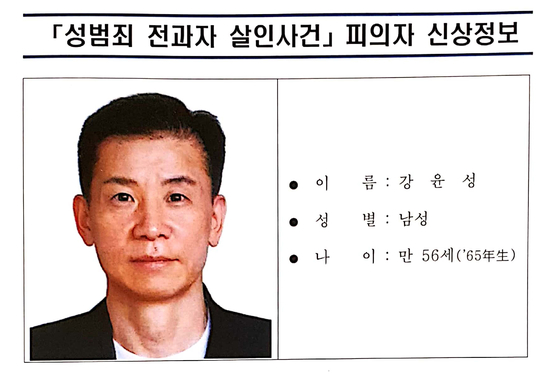 
The police on Thursday released the full name and identity of the man who had confessed to killing two women last week, Kang Yun-seong.

An expert panel from the Seoul Metropolitan Police Agency held a meeting in the afternoon and decided to make public Kang’s identity. Police identified Kang as a 56-year-old man and also released his mugshot. The panel was comprised of three police members and four outside experts.

A special law governing heinous crimes allows prosecutors and police officers to, in some cases, make public a suspect’s full name, age and photo for the sake of the public good.

Kang is the seventh suspect whose identity the police has released this year. Earlier this year, the police announced the identities of four murder suspects and two sex crime suspects.

Kang, who has 14 criminal convictions, was released from prison in May after completing a 15-year sentence. He was suspected of having killed a woman on Aug. 26 and another woman on Sunday, Aug. 29.

Following his release, Kang was to be under the state monitoring program for five years, but he cut off his location-tracking ankle monitor on Aug. 27. He turned himself in to the police Sunday morning and confessed to killing two women.

Kang told the police that he had killed the women for money. He refused to be represented by a lawyer and the police obtained a detention warrant from the Seoul Eastern District Court on Tuesday for further questioning.

According to the police on Thursday, Kang purchased bolt cutters from a hardware store around 4 p.m. and a 30-centimeter (12-inch)-long kitchen knife at a supermarket near his home in Songpa District, southern Seoul, around 5 p.m. on Aug. 26. About four hours later, he used the knife to kill his first victim in his home.

During the first murder, Kang was still wearing the ankle monitor, but because the killing took place inside his house, no alarm went off.

Hours later, around 12:14 a.m. on Aug. 27, Kang left his home, violating the nighttime travel restriction. An alarm went off, and the crime prevention team was dispatched from the Seoul Eastern Probation and Monitoring Center. Kang returned home around 12:34 a.m., before the team arrived, and told the supervisors on the phone that he had gone out to get some medicine from a convenience store.

He then cut the anklet with the bolt cutters around 5:31 p.m. the same day and ran away. The Ministry of Justice and the police started a manhunt but failed to locate him. Around 3 a.m. on Sunday, Kang killed the second woman inside her own car and turned himself in to the police later that morning. He drove her car to the station, and her body was still inside.