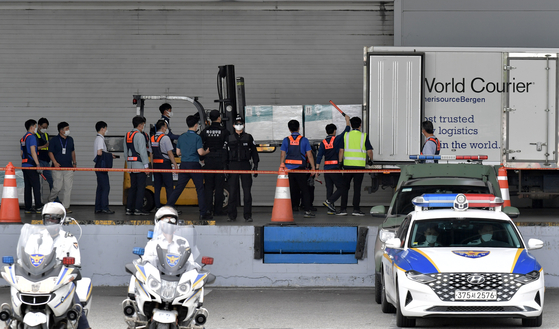 Workers load boxes carrying 526,500 doses of Pfizer's Covid-19 vaccine from Romania onto a truck at the cargo terminal of Incheon International Airport on Thursday. The vaccines are part of 1.5 million doses that Korea is getting from Romania under a vaccine cooperation program. [YONHAP]


After a summer of supply disruptions, Moderna vaccine shipments are set to resume with the arrival of 1,021,000 doses on Thursday, part of 6 million doses scheduled to land by Sunday.

Son Young-rae, a senior epidemiological strategist at the Central Disaster Management Headquarters, told reporters on Thursday that “1,021,000 Moderna doses will arrive at the Incheon International Airport at 4:25 p.m. Thursday.”


“The shipped vaccines may exceed 6 million doses," Son said, hinting that Moderna's deliveries could be more than the announced amount.

He added, “The vaccine supplies will be coming in sequentially within this week, but there is a possibility that some may arrive after the weekend.”

The U.S. pharmaceutical company announced last month that it will send 7.01 million doses of its vaccine by this Sunday, after a Korean government delegation flew to company headquarters in Massachusetts on Aug. 13 to complain after it cut vaccine deliveries to Korea for August by more than half.

Since a first batch of 1.01 million doses arrived on Aug. 23, the remaining 6 million doses haven’t been delivered. Uncertainties grew after it was found that the shipment dates weren’t documented in a contract, although they were apparently in an email to the government.

The government has dismissed worries that the Moderna delays could threaten Korea's attempt to give at least one dose of a Covid-19 vaccine to 36 million people, or 70 percent of the population, before the Chuseok autumn harvest holiday, which starts Sept. 20.

As of Wednesday midnight, a total of 29.4 million people, or 57.4 percent of the population, had received first shots, and 16.2 million people, or 31.7 percent, had been fully vaccinated, according to the Korea Disease Control and Prevention Agency (KDCA).

To meet its target, the government must inoculate more than 6.5 million people by Sept. 20, or an average of 360,000 people per day. Considering the country’s medical infrastructure is capable of inoculating up to 800,000 people a day, authorities believe the goal is attainable with the vaccines from Moderna.

“Since December last year, there has never been a time when the government has failed to achieve a milestone for the inoculation plan,” Son said.

In addition, a first batch of 526,500 doses of 1.05 million Pfizer vaccines from Romania arrived in Korea on Thursday afternoon.

Korea purchased 1,053,000 doses of Pfizer vaccines from the Romanian government, and Romania donated 450,000 Moderna shots in exchange for medical supplies to be sent later.

Eleven more deaths were added, bringing the death toll to 2,303.

While Korea is set to announce Friday new social distancing measures for next week and special virus prevention measures for the upcoming Chuseok, health authorities said they are considering including incentives for fully vaccinated people and rules for nursing home visits.

During previous major holidays, such as over the Lunar New Year holidays and last year's Chuseok holidays, the government came up with stricter or looser anti-virus measures for a set period of time, keeping in mind people's desires and the strong custom of traveling around the country to meet relatives.

In addition, they said any upcoming changes to social distancing rules will likely cover a one-month period, rather than a two-week interval, to include Chuseok in mid-September.