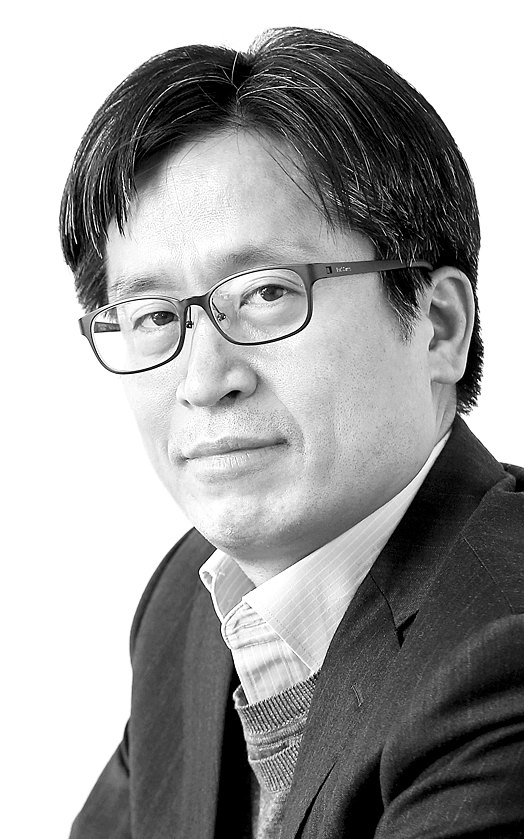 
It seems that nothing can contain the ruling party’s reckless use of its legislative super-majority. The Democratic Party (DP) is abusing its strength in the National Assembly with the justification of having the backing of voters to do whatever it wants. It is trotting out a series of “special laws” as if it has the exclusive license to make laws. It is trying to crush the constitutional rights of freedom of expression and freedom of the press. Anyone who speaks unfavorably about the May 18 Gwangju Democratization Movement could face criminal punishment. The Media Arbitration Act, obviously intended to gag the media, has been put on hold after criticism from journalists around the world. Dan Kubiske, co-chair of the International Community at the Society of Professional Journalists in the U.S., found the law to be the first of its kind in a democracy.

Key figures in the ruling front had complained of the “smell of conspiracy” in the face of every controversial issue, but their front emits a more dangerous “smell of authoritarianism.” The DP is running around the legislative playing field as if no other contestants exist. Hitler ushered the German people into a world war on the back of an overwhelming election triumph.

As democracy progressed toward the greater protection of civilian rights, the press is required to go through strict self-censorship. The conditions will toughen when claims can be made to block internet articles critical of the government or file for compensation of up to five times the damages claimed against media companies for “fake news.”

Aside from such malicious provisions, the thought of enacting a law to target media organizations is overbearing.

“Punitive damages can be claimed through the amendment of the Civil Act. All laws must have a general purpose to ensure fairness of everyone before the law. A law specifically targeting media outlets cannot be fair. Such statutes must be restrained,” said a former Supreme Court justice. 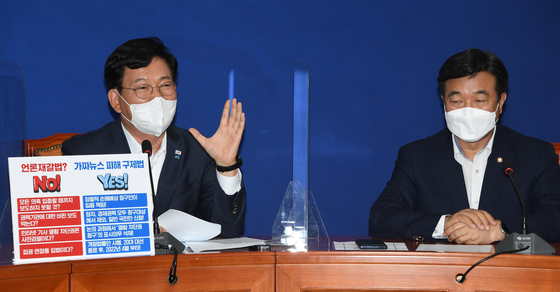 Flanked by ruling Democratic Party (DP) floor leader Yoon Ho-joong, Rep. Song Young-gil, DP leader, speaks about the highly controversial revision to the Media Arbitration Act on August 23. After facing strong opposition at home and even from abroad, the DP took a step back and agreed to discuss the revised bill with the opposition before voting on it on September 27. [KIM KYUNG-ROK]

The press-silencing act was foreseen. The ruling front has been lambasting the prosecution and press throughout the investigations and trials of inner circle figures like former Justice Minister Cho Kuk and former South Gyeongsang Gov. Kim Kyoung-soo. Even as President Moon Jae-in handpicked Yoon Seok-youl as prosecutor general to investigate power abuses in the inner circles, the DP nonchalantly pressed ahead with prosecution reform. Although Moon asked Yoon not to hesitate in investigating his aides, the DP went after the prosecution when it targeted Cho Kuk. The DP even attempted to strip the top law enforcement agency of its investigative power. When any government officials became criminal suspects, no one willingly confessed or apologized for their wrongdoings. They claimed innocence in court. They become self-righteous when their fans rallied in their defense. They lost a sense of guilt and acted as if they had become pardoned by the court of public opinion.

While they find their faults trivial, they accuse the prosecution and media of having ulterior motives for attacking them. They claim that the former prosecutor general ordered investigations into the powers that be as a vengeful act against prosecution reforms and that media outlets defamed the president and Blue House by over-reporting them.

After they were done with prosecution reform, they moved onto taming the media. Although the law aims to prevent fake news, it can discourage investigative reports and end up masking the truth. The revised bill would forbid sitting public officials or lawmakers from making damage claims. But they can move on to do so after they resign from office. They can also have their family or aides file suits. The move is similar to weakening the prosecution by scaling down its investigative scope and subjects on the pretext of reform.

Society is being forced onto a lawmaking bandwagon heading for catastrophe. We must keep our eyes wide open and watch. We must stand up if our democratic foundation is in jeopardy. Rep. Song Young-gil, the DP head, asked opposition lawmakers if they would be forever in the opposition when they blocked the media law. But clearly, the DP also cannot be the ruling power forever.

“A country has hope only when a scholar can go on with research, the judge makes rulings based on the Constitution, and the press keeps watch on the sitting power,” said former opposition head Kim Chong-in.