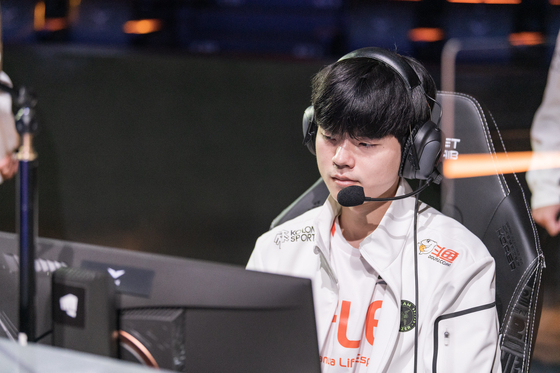 Predictions were divided before the match. Based on the two teams' overall form over the summer split, the obvious favorites were Nongshim RedForce, who led the league at times and finished the regular season at a very respectable third place. Hanwha Life Esports, on the other hand, had mostly looked clueless all summer and just barely managed an eighth-place finish.

Due to both sides' most recent showings on stage, however, some chanced a different guess. In the last week of the regular season, Hanwha Life miraculously recovered their form from the spring split — back when they finished third — to take down eventual postseason finalists T1 2-0 in a shock upset. Then on Tuesday, the first day of the Worlds qualifiers, they proved their turn of momentum was not a fluke by taking down Liiv Sandbox 3-1.

Nongshim RedForce, on the other hand, suffered a 3-0 loss against DWG KIA in the second round of the summer split playoffs. They did not go down without a fight, and falling to a heavyweight like DWG KIA usually may not be cause for great concern, but all losses are spirit-dampeners, and the straight sweep was not a good sign for their chances in the qualifiers.

In the first set, Hanwha Life put Park "Morgan" Gi-tae on Camille for the fifth game in a row — the top laner had first-picked the champion in all four of his games against Liiv Sandbox — while Jung "Chovy" Ji-hun mixed things up from with a somewhat uncharacteristic Azir pick.

Nongshim's priority was on handing Aphelios and Thresh to their star bottom lane duo of Seo "deokdam" Dae-gil and Kim "Kellin" Hyeong-gyu. The team's jungler and leader Han "Peanut" Wang-ho picked Trundle and took on a more supportive role than usual.

On the Rift, Hanwha Life bot laner Kim "Deft" Hyeok-gyu maintained his pristine form from the day prior, securing lane priority for his team and completely shutting down all-pro first team bot laner deokdam's influence. Oh "Vsta" Hyo-seong also stepped up for the occasion, quickly making it evident who was the better support player on the day. The game itself was mostly uneventful, but Hanwha Life racked up an advantage via stacking Elemental Drakes and comfortably closed out come mid-game.

The second game saw Nongshim alter their approach significantly by banning Camille away from Morgan, placing deokdam on Ziggs and building a top half-focused composition with Kim "Gori" Tae-woo going on Irelia and Peanut taking Xin Zhao. The changes were to no avail, however; Gori's Irelia was largely lackluster, Morgan held his own just fine on his old comfort pick Renekton and rookie jungler Kim "Willer" Jung-hyeun had Peanut's number all game long.

With the score at 2-0, Nongshim tried once more to reset the flow by taking away Azir from Chovy, giving Peanut a scaling carry this time in Nidalee and placing Lee "Rich" Jae-won on a proper split pusher in Jax. Hanwha Life was happy to give Morgan Camille again and put Chovy on his trademark Galio.

Yet no amount of strategic adjustment could not make up for the difference in individual form. Deft, Vsta and Chovy outmuscled deokdam, Kellin and Gori for the third game in a row and comfortably closed the series 3-0, completing their miracle run and locking in their tickets to Worlds 2021.

Asked in the post-match broadcast interview whether there was any foreign teams or players he would like to play against at Worlds, Deft answered: "I've played against my former team [Edward Gaming] only once at Worlds, so I'd like to meet them again this year."

Morgan declined to specify any teams or players. "It'll be my first time ever at Worlds, so I think I'll focus more on just making the most out of the experience and growing as a player," he said.

Hanwha Life Esports will now play against T1 on Thursday 5 p.m. to decide which team will get to skip the play-in round of Worlds 2021. The winner of that best-of-five will be seeded directly into the group stage alongside DWG KIA and Gen.G Esports. The loser will have to play through a preliminary round to join the other three LCK representatives at the main event.