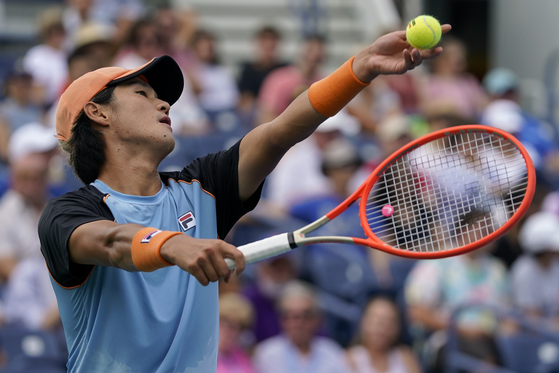 Kwon Soon-woo serves to Reilly Opelka of the United States during the first round of the US Open tennis championships on Tuesday at the Billie Jean King National Tennis Center in New York. [AP/YONHAP]


Kwon Soon-woo has dropped out of the U.S. Open men's singles and doubles tournaments, losing both opening games at the Billie Jean King National Tennis Center in New York.

On Tuesday, Kwon was knocked out of the first round of the U.S. Open by Reilly Opelka of the United States in three straight sets.

Kwon put up a hard fight against the six-foot-11 (2.1-meter) American in the first set, but Opelka was the one to reach the full seven points needed to break the tie break and clinch the set after 52 minutes.

The Korean baseliner seemed to have lost steam after dropping the prolonged first set, and gave away the next two sets, both 6-4. Opelka had an impressive 33 aces in the three sets, the strongest traveling at a speed of 226 kilometer per hour (140 miles per hour). Kwon had 13 aces of his own, but was unable to match Opelka’s power.

On Wednesday, Kwon was again in action in the men’s doubles tournament alongside Divij Sharan of India. The duo faced 2020 Australian Open Champions Rajeev Ram of the United States and his partner Joe Salisbury of Great Britain.

Kwon and Sharan, unable to figure out the four break point opportunities in the match, quickly conceded the two sets 6-3, 6-4 to the world No. 4 seeds in just over an hour.

Last year at the 2020 U.S. Open, Kwon reached the second round and lost to Denis Shapovalov of Canada. Kwon has now been at nine grand slam matches and the best he has done was reaching the third round of the French Open this June.

Only two Koreans, Chung Hyeon and Lee Hyung-taik, have reached the third round at Roland Garros, and neither made it any further.