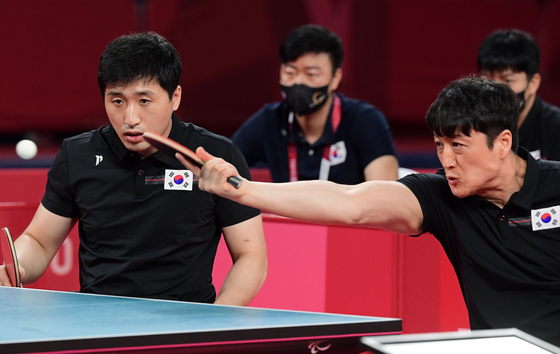 
Korea picked up two more medals in table tennis at the Tokyo 2020 Paralympics on Thursday, taking silver in the men's team class four to five and the women's team class one to three at Tokyo Metropolitan Gymnasium in Tokyo.

Kim Jung-gil put up a good fight against Cao, the world No. 1 in his sport class, in the singles match, but the Chinese player emerged victorious to take the match 3-2 and win the overall contest 2-0. China took gold and the Korean pair settled for silver.

Yoon Ji-yu and Lee Mi-gyu were up next, taking on China's Xue Juan and Li Qian in the women's team class one to three gold medal match.

The women's match was closer, with Yoon and Lee holding the Chinese pair to a 3-2 score in both the team and individual matches. Despite the effort, both games and the gold medal ultimately went to Xue and Li.

There are 11 classes in Paralympic table tennis: Athletes in classes one to five compete in wheelchairs, while those in classes six to ten do so standing. Korea has so far won 12 table tennis medals in Tokyo. Korea's men's class one to two team will compete in their gold medal match at 5 p.m. on Friday.