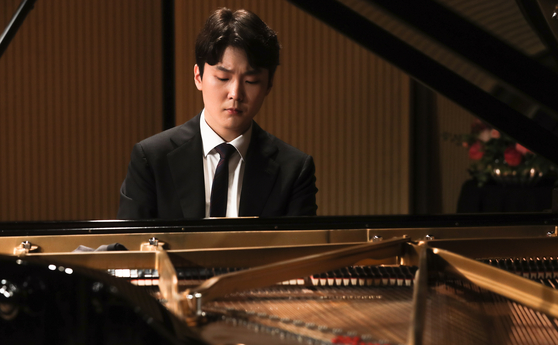 
Korea’s star pianist Cho Seong-jin recently released his first Chopin album in five years, and to promote it, he'll be kicking off a national tour from Saturday, which will stop in seven cities.

Many of his fans have been wondering why Cho, who became a star pianist overnight after winning the International Chopin Piano Competition in 2015, has not released a single album related to the Polish composer for the past five years.

The first album Cho released after signing an exclusive contract in early 2016 with prestigious classical music label Deutsche Grammophone was Chopin’s “Piano Concerto No. 1,” which was released in November that year. However, none of the albums he's released since then have included any works by Chopin. He’s recorded Debussy, Mozart, Schubert, Liszt, as well as an album with German tenor Matthias Goerne, which contains songs by Wagner, Pfitzner and Strauss.

Was he tired of Chopin after giving his everything to the competition in 2015?

“Honestly, the competition was a turning point in my life. But at the same time, it was a horrible moment for me that I don't want to experience again," he said, adding that he wishes all the best to the participants of the upcoming competition, which will be held next month for the first time since 2015. The competition is held every five years but last year’s edition was canceled because of Covid-19.

“I think I consciously avoided recording Chopin since the first album,” Cho said during a press conference held Friday at the Seoul Arts Center in southern Seoul. “Winners of the International Chopin Piano Competition like myself are blessed with many opportunities but at the same time, they can be easily imprinted on people’s minds as a ‘Chopin specialist.’”

“So I consciously performed and recorded other composers,” Cho added. “It’s been five years now [since the last Chopin recording] so I thought the time was alright for me to record one now.”

Cho’s latest Chopin album consists of the composer’s “Concerto for Piano and Orchestra No. 2 in F minor” — “just because my first album had No. 1.” The new album also includes "Scherzo Nos. 1 to 4.”

“I personally like Chopin’s ‘Concerto for Piano and Orchestra No. 2’ more than No. 1. I think the second movement in No. 2 is the most beautiful piece written by Chopin. It’s so beautiful.”

Cho's first stop on the tour will be Jeonju on Saturday, followed by Daegu on Sunday. His Seoul concert at the Seoul Arts Center will be held on Sept. 7. After touring the other cities part of the nationwide tour, he’ll be back at the Seoul Arts Center on Sept. 18, a date which was added after the tickets for his Seoul concert, and most of the concerts in other cities, sold out.

The final “Encore Concert” will also be streamed live, for those who couldn’t manage to get their hands on a ticket. Tickets for the online concert cost 10,000 won ($8.60).

Before the press conference came to an end, Cho said he wanted to express his appreciation to his fans.

“I always knew this but realized it more clearly as I experience the pandemic and canceled concerts — holding live concerts with audience members is so important for me,” he said. “I receive so much energy from them that they are indispensable for me.”

Cho said he also wants to reassure his fans, who may be concerned that he's going to pursue a career in conducting after witnessing him on a podium with a baton for the first time at the Tongyeong International Music Festival in 2019.

“Please do not be worried,” he said. “That was my first and last time conducting. I’ll just focus on my piano performances from now on as I’ve realized that I have no talent in that field.”