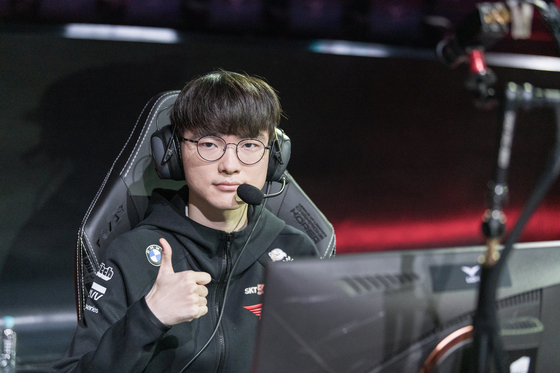 T1 mid laner Lee ″Faker″ Sang-hyeok holds his thumb up for the cameras while setting up to play at LoL Park. [RIOT GAMES]


T1 beat Hanwha Life Esports 3-2 in one rollercoaster ride of a series on the final day of the Korean regional qualifiers for the 2021 League of Legends World Championship, on Thursday evening.

With this victory, T1 has secured their spot in the group stages of Worlds 2021 as LCK's third seed, alongside first seed DWG KIA and second seed Gen.G Esports. Hanwha Life will have to play through a preliminary round to join the other three Korean representatives on the main stage.

Based on the two teams' overall form over the summer split, the obvious favorites were T1, who finished fourth in the regular season and second in the postseason, only falling to DWG KIA in the finals. Hanwha Life Esports, on the other hand, had mostly looked clueless all summer and just barely managed an eighth-place finish, failing to even qualify for the playoffs.

Due to both sides' recent showings on stage, however, some chanced a different guess. In the last week of the regular season, Hanwha Life recovered their form from the spring split — back when they finished third — to take down T1 2-0. This Tuesday and Wednesday, they went on to prove their turn of momentum was not a fluke by taking down Liiv Sandbox 3-1 and Nongshim RedForce 3-0 to complete a miracle run through the regional qualifiers and qualify for Worlds 2021.

T1, on the other hand, had suffered a 3-1 defeat at the hands of DWG KIA in their last outing, and had lost 2-0 to Hanwha Life in the two teams' last match. As such, there was some reason to believe Hanwha Life could carry on their recent streak of wins even against T1.

The first game saw T1 target Park "Morgan" Gi-tae in the draft phase, banning away both Camille and Renekton, the only two champions the top laner had piloted during the first two days of the regional qualifiers.

T1's approach proved effective; Morgan was far less effective on Gnar than he had been on his two comfort picks, and exposed himself as Hanwha Life's weak link. With Lee "Faker" Sang-hyeok's Kassadin leading the fore, T1 closed out to take the lead.

The second game was not too different from the first, with Morgan sticking with Gnar and once again struggling to remain relevant. Ace mid laner Jung "Chovy" Ji-hun's two solo kills on Faker in the laning phase threatened to put a dent in T1's momentum, but the slight lead did not snowball into something more, and Faker later rallied, making up for his missteps and more with two clutch Emperor's Divides to win the game.

With the score at 2-0, Hanwha Life switched gears, opting for more aggressive and proactive solo lane picks — Irelia for Morgan and Sylas for Chovy. While Morgan did not fare too well, Chovy gave his best performance of the night, putting on a Herculean display to singlehandedly deliver his team a win. Oh "Vsta" Hyo-seong's engages with Rakan were also instrumental.

Hanwha Life went into the fourth game with newfound confidence. and this time Morgan not only held his own but even carried at times on Irelia, maintaining good side lane pressure through the mid-to-late game and pulling more than his weight in late game teamfights. Kim "Willer" Jung-hyeun also stepped up for the occasion on Viego, improving upon his two previous games on the champion to secure a win.

A reverse sweep seemed to materialize in the early minutes of the fifth game, with Morgan and Willer combining forces on Renekton and Viego to give Hanwha Life the lead. T1 responded well, however, with Faker and Moon "Oner" Hyeon-joon heading down to the bottom lane on separate occasions and restoring priority for the duo of Lee "Gumayusi" Min-hyung and Ryu "Keria" Min-seok.

The balance remained delicate through the mid game, but T1 were able to capitalize upon a few questionable engages from Vsta's Alistar and secure a decisive lead. Despite Kim "Deft" Hyeok-gyu's valiant efforts on Varus, Faker and Co. were able to finally close out the game and the series.

"Chovy had looked to be in really good form recently, so that was definitely a concern going into today's match," Faker said in the post-match broadcast interview. "But I didn't think we would lose."

Gumayusi — sporting a new haircut he decided to get after the summer split finals against DWG KIA because he "felt empty" after the loss — paid respect to his lane opponent as well: "Deft looked to be in really good form lately, so keeping him in check was a priority today."

DWG KIA, Gen.G Esports, T1 and Hanwha Life Esports will soon represent LCK at Worlds, the most important League of Legends competition of the year. The event's exact schedule and host nation are yet to be officially announced, although it has been confirmed that it will take place in Europe.