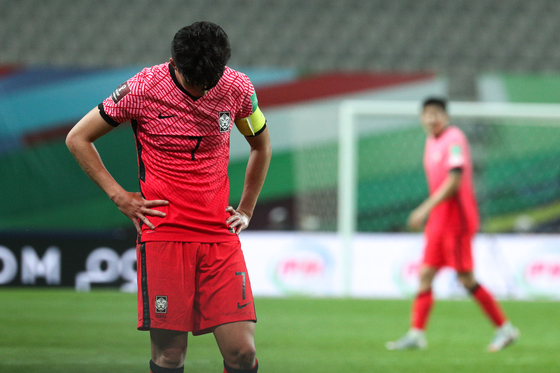 
The Korean national football team was forced to settle for a 0-0 draw against Iraq on Thursday evening as its ineffectual offense repeatedly failed to deliver.

There was little to get excited about at Seoul World Cup Stadium in Mapo District, western Seoul. Korea dominated the game — as well they should at world No. 36 to Iraq's No. 70 — but were unable to do anything to impact the score.

Korea had 15 shots to Iraq's two and 68 percent of the ball, but despite having three international stars in the attacking four — Son Heung-min of Tottenham Hotspur, Hwang Ui-jo of Bordeaux and Lee Jae-sung of Mainz — the five shots that were actually on target were all simple saves for Iraq's Fahad Talib.

Korea's defense was perhaps the only positive note. Fenerbahce's Kim Min-jae was as indefatigable as ever and Ulsan Hyundai's Hong Chul appeared to be everywhere at all times. The persistent back line prevented an embarrassing defeat, but the 0-0 draw was essentially a victory for Iraq anyway.

"It would have been great to have won today but the final round is always fraught with difficulties," captain Son said after the game. "We'll try to play better Tuesday [against Lebanon in the next qualifier]."

The draw puts Korea in third place in Group A of the Asian third round qualifiers for the 2022 Qatar World Cup, behind Iran in first place with one win and the United Arab Emirates, who edge out Korea on fair play points.

With four games left to play, the Taeguk Warriors will need to avoid another tepid performance like Thursday if they want to advance to the World Cup. Only the top two teams from the group are guaranteed a place, while the third team alone advances to a fourth round of qualifiers.

Korea will next face Lebanon for what — on paper — ought to be a fairly easy match on Sept. 7.